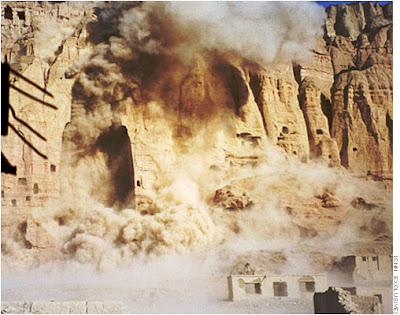 All this gettin' up and leaving "the Conference against Racism" looks a bit adolescent and Drama queenish to me. Let it be said, I'm no fan of Pres. Ahmadinejad and his regime!!! But saying that "Zionism is racist" is not that far off, from the truth. Yes, wherever we like or not; Living in Israel is living with Apartheid.... I don't understand all the fuss and I start to suspect that Ahmadinejads speech is not the reason, there must be something else - we don't hear about - What do Europe benefit from boycotting this conference? Wouldn't it have been more constructive to stay and make a well augmented defence instead? Doesn't it just show, that we're acting up like spoiled brats, spreading "Our" Democracy and Freedom of Speech by the way of the gun, but when it comes down to actually having to imply it in our own actions, we stomp off and slam the door, when people say things we don't like to hear? That's not the way, I'd  democratise the unruly nations of the world who, let's face it, does need a lesson or two, on how to implement basic human-rights to their peoples.
What I find much more, but much more scary is the Taleban powers slowly rising in Pakistan! Cause this mean more power to the Dark Side, it means a return to most primitive level of human existence, and it probably means yet another war and Pakistan is not some picturesque & backwards country, still living in the middle-ages, yet! They have a fully grown military force and when/if ? the US and her allies invades , it will not be just a picnic in the hills!
Introducing Sharia as a way of life will be crippling to the Pakistani society. This harsh degrading view on humans and the treatment of women is beyond belief, recently a 17 year old girl was publicly flogged for going outside her house, without (family-)male companion. If this spreads through out the rest of the country, and what's there to stop it, then the region will have a whole new perspective of an explosive neighbourhood to display - with our troops sandwiched in between...
I find it worrisome, that we don't hear more of these troubling news - because this is something to fear, ladies and gentlemen.  And they'll not contain themselves to stay put, at their own neck of the woods - and yes, they'll have the means and know-how to make international terror raids much more often and much closer to "home" than Al Qaeda has now ...  The arrogance/ignorance of the Western world will quickly come to a screeching halt, when  operations like 9/11 in NYC, Madrid and London will become everyday horrors... I'm not trying to instill fear and make a panic run for the exit, but this is serious - I think.
In Afghanistan, Pres. Karzaii is inching closer to the same destructive forces, by presenting partial Sharia laws - again sacrificing women and children; sending the Afghan society back into the shadows. And in Iran we have Ahmadinejad and his priests shouting out the glory of Sharia laws, while they hang their children.... (Before we get too smug, a Rabbi says; Israel should do the same with the Arab kids)
I still have the images of the great Buddhas in Bamian, being blown up as the image of how primitive Mankind can be, when they succumb to fanaticism and the primal fear of not being able to control the tomorrow nor the free thinking mind of their fellow Man -
Is this what, we want
American, British, Danish boys and girls to fight and die for?
No blowing up mountains nor slamming of doors will ever solve a damn thing - Thought we'd know that by now. And if we don't learn how to do it differently sometime soonish, we're going to perish as the people, who didn't know how to go forward only crawl backwards,
back into that primordial soup we came from....
Posted by Gabs at 7:04 PM

The main reason the US and Europeans 'staged' a walk-out is because the last time this conference was held, in Durban, South Africa, the conference wanted to vote on a resolution calling on the 'former Colonial powers to apologise for their actions during and post Colonialism.'

The US, UK and other Eurpoeans objected, not on moral grounds (so they said at the time) but on legal grounds; they felt such a resolution would leave them open to a series if legal cases for reparations, which, given they are the very same entities that lend money via the IMF to 'third world' countries to privatise their untilities, undermine their local food production in favour of cheap imports, and rstructure in favour of 'Free Trade' etc, etc would run counter to their 'strategic interests'.

The 'walk-out' was 'staged' back in 2000, and again, this year, as a fig leaf to cover up the FACT that colonialism is well and truely alive, and thriving.

As for your comments on Pakistan, a little research and some analyis on your part might just show that US and UK interventions in that region, historic and current, lie at the root of the rise of fundamentalism. In fact it was fundamentalists FUNDED by covert and overt US funding that led to the expansion of Al Queeda and other similar organisations in the late 70s and 80s ... and continues to this day with daily UAV missile attacks on Pashtun peoples living over the border from Afghanistan.

People will take only so much 'collateral damage'... even good people, which most of these people are, in the moral sense of the word. As Bill Hicks pointed out the US brings war to 'brown people' as a way of life.

Like many Americans, Europeans etc etc you know almost nothing of your own history apart from what is recorded in a few school text books.

I reccommend Howard Zinns "Peoples History of the United States", John Taylor Gattos "An Underground History of American Education" and Naomi Kliens "Shock Doctrine" to bring you up to speed.