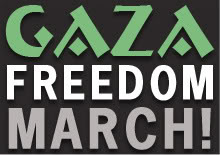 BREAKING: U.S. Citizens attacked by Egyptian Riot Police in Cairo in front of
U.S. Embassy
Call the U.S. Embassy to demand the release of those detained/that permission
is granted for the March to cross into Gaza: Telephone: (202) 2797 3300.

One of my friends, Joshua Smith, just texted me from Cairo and said that some
U.S. citizens of the Gaza Freedom March went to the U.S. Embassy today there to
try and implore the staff there to intercede on behalf of the March to help get
them into Gaza--they were not so warmly welcomed.

Recently, almost 1400 people from around the globe met in Cairo to march into
Gaza to join Gazans in solidarity and to help expose their plight after years
of blockade and exactly a year after the violent attack in what Israel called
"Operation Cast Lead" that killed hundreds of innocent Gazan civilians. So far
the Marchers have been denied access (Egypt closed the Rafah crossing) and
their gatherings have become increasingly and more violently suppressed.

In my understanding of world affairs, embassies are stationed in various
countries so citizens who are traveling can seek help in times of trouble, but
this doesn’t appear to be so, right at this moment in Cairo.

Josh reports, and I also just got off the phone with my good friend and
Veterans for Peace board member, Mike Hearington, that about 50 U.S. citizens
were very roughly seized and thrown (in at least one case literally) into a
detention cell at the U.S. embassy. We are talking about U.S. citizens here
being manhandled by Egyptian riot police. According to Josh and Mike (who both
just narrowly escaped), it appears that people with cameras are especially
being targeted. Another good friend of mine, and good friend of peace, Fr.
Louis Vitale is one of those being detained. Fr. Louis is well into his
seventies!

Josh posted this on his Facebook wall about his near-detention experience:

We just got away. They were trying to drag me in but we kept moving... And most
were dog piling another guy. Then they drug him into the parking lot barricaded
riot police zone, lifted him up and threw him over the police and down into the
zone. And attacking those taking pictures or attemptingto.

When I was talking to Mike he said that an Egyptian told him that all Egyptians
are in solidarity with the Marchers and with the people of Gaza/Palestine, of
course, but the “Big Boss” (the U.S.) is calling the shots.

Egypt is third in line for U.S. foreign aid (behind Iraq and Israel) and its
dictator for life, Hosni Mubarek, is a willing puppet for his masters: the
US/Israeli cabal. Israel could not pursue its apartheid policies without the
U.S. and it’s equally important for this cabal to have a sold-out ally as its
neighbor.

Today also happens to be the anniversary of the 1890 U.S. massacre of Native
Americans (Lakota Sioux) at Wounded Knee, South Dakota. It is sad enough that
we are also living on stolen land, but also that the Israeli government had
good teachers in disposing of its indigenous population!

What are the Israeli settlements on the West Bank, if not stolen land from the
indigenous population and what is Gaza if not a mega-reservation? As at Wounded
Knee 119 years ago, the Israeli siege and attack on Gaza is nothing more than
big bullies shooting fish in a barrel.

Call the U.S. Embassy to demand the release of those detained/that permission
is granted for the March to cross into Gaza: Telephone: (20-2) 2797 3300. (US. Embassy in Cairo)
UPDATE; ALL , WHO WERE DETAINED, HAVE BEEN RELEASED BY NOW!!
Please re-post this alert and spread the word.

Was things not supposed to “change” in the Age of Obama?
Links; Huffington post Article, - Freedom March 2010 Latest news and background-
Posted by Gabs at 7:16 PM