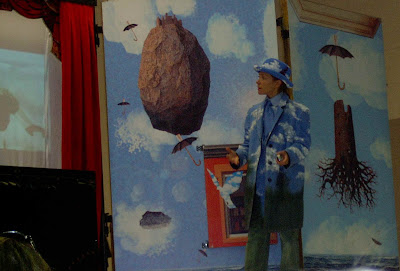 Well, last night 01:00 GMT and 09:00 in HongKong; The Biden Vs Palin show went out into the satellite orbit and touched down, right here in Copenhagen, Denmark at 03:00 am - Had set the alarmclock, as to be in full vigor; with tea and my favorite icecream; Baskin &Robbins' Cookies'n' cream within my reach....
And what to say? I'm totally and absolutely on my knees with infatuation with CNN's "Prime Toyboy"; Anderson Cooper,  Wolf Blitzer, a horde of analysts, commentators and leading figures in the world of political journalists and speech writers of every observance!  But what really turns me on is; The "Magic Map" - A gigantic touch TV screen, where the "Senior Political analyst" of the hour can throw maps of states, statistical figures, swing-votes, cities, Democrats' Super-delegates, Homepages and what have you around and around...  -and then draw a color-full circle or a line or two to underline a statement made in the heat of the moment or under the influence of outrageous paychecks and the power that comes along with it, almost as an afterthought! - Magic Map is (for me) the definition of a high-tech playmate of the year!
But let the one and only VP debate begin;
I saw Joe Biden ( Yeahr.. I misspelled his name in the last post!) behave like a true gentleman, actually chocking up (!! - touching the subject of his life as a single parent) when, Mrs Palin, for upteemth time insinuated that he wouldn't know, what an average American, would be talking about at the kitchen table and she would, because she is a Mother! He didn't correct her, when she got names she should know, wrong! He didn't patronize her and for me, his biggest accomplishment of the evening was, that he didn't laugh outright of all the silliness and hot air she vented... He went after her boss instead - Well done, Joe! "Can I call you, Joe?" ( I'm so down to earth, straight forward, folksy and to top things off, I'm a hockey Mum too! You see...!)
Man, did she sound rehearsed, refusing to answer the questions, where she hadn't been coached beforehand. She had two or three sentences, she said again, and again I.e. "The greed and corruption of wall street" "Tap into"..... She said herself; "I have only, what, 5 weeks of this?" When asked if there were any promises, she had to undo, because of the recent financial situation.. And then she wants to take on Washington? - McCain being part of that exact same city and the people running it...
Maybe she's dreaming of headlines like "Mrs Palin goes to Washington"
Or maybe secretly harboring the illusion, that James Stewart's character is  based on a true life story and she gets to reenact it?
- But then again, I don't think for a second, thats she's even half as "naive and sweetly innocent" as she wants us to believe! She must be thankful for the lack of followup questions in last night's debate and she probably, inwardly, thanked her good lord above, when moderator  Gwen Ifill  chose to let Sarah Palin slide off easy and let her "Not answer" with "I'd rather talk about" And what she just loooved to talk about was about: All the oil in the Alaskan ground and all the pipes and millions of barrels of oil (And pork?)  America could "Tap into" there... - No fighting windmills, solar energy or other alternatives for Mrs Palin! She even managed to answer the question of " What is you Achilles heel " with a 3 minute long self-glorification! (Maybe she doesn't know the meaning of the phrase?) Apparently, being a Hockey-mum is her biggest asset on her job application for Vice Presidency of the United States
I'm so very surprised, when Rep. commentators afterward tells us, what a fine job  she did; talking "Folksy"! Do they honestly believe that a few "Doggones" and "Darns", is what it takes, when applying for the second most powerful job in the world?
No way, the Americans is gonna buy this toxic, ignorant, one horse town wannabe politician... ?!
- I said with hope and faith in the Nation of the brave.... But I still won't bet good money on the victory of Obama/ Biden ticket!
Thankfully the election is not up to vice presidents
but to;
Barack Obama and  John McCain
Their next debate will be on next tuesday!
Posted by Gabs at 10:15 PM

Beware of the Palin marketing team. Do Americans really want a re-branded continuation of the Bush Administration?