The devil at the crossroads...

The Congo is bleeding to death... And the world is slowly but finally taking notice of the atrocities, which has been going on for decades...! A country; Where the only safe act for civilians; would be fleeing to the forrest/bush - In the Congo civilization has come full circle; we came down from the trees and now we're going back there... Leaving all the signs of prosperity and evolution behind, i.e. huts, food, pots and pans and all personal belongings, because that will only attract soldiers -Government forces and rebels alike. Soldiers on a rampage, burning, raping, torturing, stealing and murdering everything in their way!! Sexual assault being a key weapon in this monstrous war! 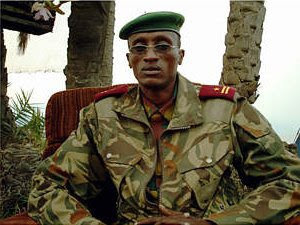 Human Right Watch has reports of soldiers raping girls only 3 years old! HRW actually asked for the arrest of Laurent Nkunda for war crimes and crimes against humanity in 2006! But we are now nearing the end of 2008 and the international community has still not done anything! The 17.000 UN peacekeepers are stretched to a breaking point ... As peacekeepers, they don't stand a chance against the rebel forces.
Some misc. numbers; Some 3.4 million deaths! Approx. 1 million people displaced. Tens of thousands raped. An unknown number of child soldiers.........
If you, like me, don't know the first thing about the Congo situation; Then Tim Butcher's book "Blood River" is a good place to start... And Barbara Kingsolver " The Poisonwood Bible"
There's a million reports and pieces written on DR Congo, some are good, some are outstanding and most are most informative - They're all pretty easy to find on the internet.
(If you can read Danish, you can Tag; DR Congo on my site, and you'll find a post, with a lot more info on the subject- written in spring)
Posted by Gabs at 9:36 PM