Exodus on the roads of Goma, DR Congo. 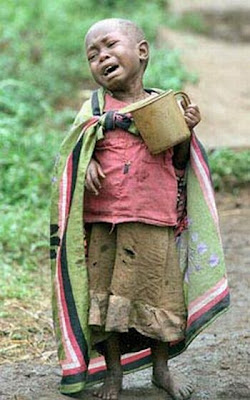 My life is no bed of roses... these days...!  Sat with good friends and whined about it, for a couple of hours, this afternoon. Bought some of the favorite ice cream on the way home, made some food and turned on the news...
- But shame on me; The report from DR Congo, made my heart and soul weep. Thousands of children, women and old men, squashed against the gates of the UN Aid center...  Mothers subjecting their children to the guards, who're beat the people back with sticks until finally the crowd surge thru, using their force of desperation as ramrod. Inside the gates, there will only be High energy-biscuits to be eaten and only for the children. But for some, this will their first "food" since tuesday! Aid-workers estimate; that a least 100.000 people has been displaced during the last week!! - About a million has been displaced since the war broke out! Millions raped and killed. The numbers are staggering and the waves of humanity on the roads are heartbreaking.
What is the world leaders waiting for?  How can we let this happen, in this year of the lord 2008? DR Congo is mineral wise, an extremely wealthy country, but alas no oil.... Is that it? Has the lesson from the Rwanda genocide, not sunk in? And this in fact, seems to be an overspill, from that exact same "incident" -
The Global-community had a lot of self searching about the catastrophic delays of intervention in the Serbian/Bosnia and the Hutu/ Tutsi ethnic cleansing. Well, now is the possibility of going in before the disaster goes of the rails. There's already some 17.000 UN peacekeepers in the Congo. But they have so far, failed in protecting civilians
Posted by Gabs at 9:05 PM