So this is it! The biggest show on earth is about to go down....On this side of the pond, due to the time difference, it'll be tonight.... So I'll have amble time, to find the comfy spot with the brand new Netbook on my lap, the remote within reach and on the table next to me, there's be good Lao coffee, excellent Spanish brandy and great American Ice cream. The world is getting smaller... As I probably will be zapping between BBC, CNN and Danish TV all night on my Japanese Flat screen.... Not rocket-science why US elections is so important to all of us. But it also makes you wonder, about all these Americans now queuing up to vote, who knows so very little of the outside world. ...... And the power and impact they have, on that world ..... Scary, really...!! 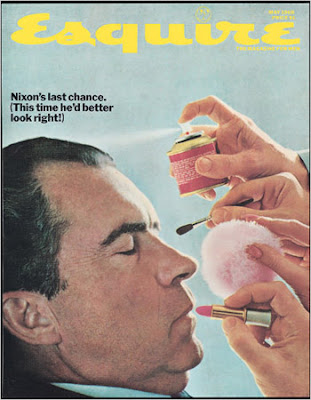 Outside the choice of beverage, staying up for the US elections, is a lifelong tradition, which started, when I went to boarding school, where, at the tender age of twelve, we were given the opportunity to stay up late and watch election night. We started out as a group of 15 kids, eating popcorn and having a great time. All being absolutely ecstatic of being allowed up that late... But as the hours wore on and the boredom sat in (Remember; this were the days of black and white television and serious talking heads with ties) the kids slipped off or fell asleep one by one... It ended up as a pretty lonely affair and Rep. Richard Nixon's re-election and win over Dem. George McGovern was a bit of a letdown anyways! Watergate was in it's very beginning and not yet the full blown scandal that later led to the Nixons impeachment. (There's already die hard Republicans working to impeach Obama - if you can believe it!) As an adult it's a much more festive thing, alongside the live broadcasts has been spiffed up considerably since the early 70's...Thankfully!

I hope and by now pretty much expect Obama to win! But as a Palestinian with a valid Greencard muttered; " I think, I'll vote for Obama, not that it'll make a difference to the Palestinian issue. But if you're really anti American and really wants to take down US, You'd vote for McCain... " - Hmmm.. ..
Posted by Gabs at 2:22 PM