A sweet day after a hard night! 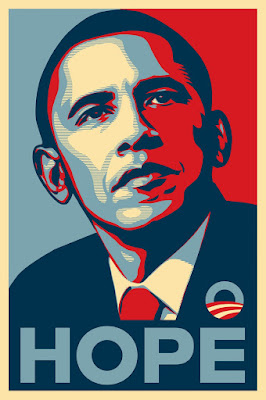 This is the eve of the day after.... History was written before our wide open eyes.. . As I'm 50 years old, I can say I've been "witness" to several historic events; The assassination of JFK, Watergate, Glasnost, the fall of the Berlin wall, 9/11 and now this; The election of the first Afro American into the oval office. This will have such an impact on American society, on the psyche of the black youth and I think this will ultimately bring a profound change to how we perceive each other, not as black, brown or white, but as human beings.

The black community now have a true role model , when climbing the social ladder and education could cease to be a "Whites Only" aspiration "Do your home work, Leroy! And you can become the President of the United States" ! (In some urban areas, there's a 70% high school dropout in the black areas!) But the racial climate is obviously changing and fast! Maybe the creators of "24" would like to receive a handwritten note from Barrack, as thanks for doing the unthinkable; Casting a black actor as US President Palmer in the popular TV-series. Also a thought to the creators of "The Westwing" would maybe in order. This was yet another TV series, which at the time had, what seemed an outlandish casting choice of a Latino as the leader of the free world. - Remember; It's was only in '81, that MTV first aired and they didn't have any black artist on-screen before 1983!!!- This is truly mind boggling!!

PS. The world saw the first black - and youngest Formula 1, World Champion in Lewis Hamilton today! - But the medias need to to mention color, only shows ,that we still have a long way to go!

It all seems a bit empty and hushed today. My glasses are no longer fogged up, (I even saw Colin Powel choke up, let alone Jesse Jackson who was actually bawling his eyes out!) - and I can safely put William Safire's Political Dictionary back on the shelve. To gather dust until the next time, I don't get what they're going on about, when I have a hard time, deciphering the political terminology especially the American variety!


Obama has been called passionless, boring and like an open book. But when I see him looking, touching, holding and kissing his wife. I see a couple who is still in love after 16 years of marriage and everything but, passionless. They look sexy together. When you see other presidential couples ( Think of the body language of John and Cindy McCain - I've never seen him touch her?!) giving each other chaste pecks on the chin and at the most, holding hands. Last night his presentation of Americas first lady, came straight from the heart. We felt it all the way through the television screens. It's so refreshing to finally see a mature, equal and adult relationship who seems like they still enjoy each others company - in bed too.....!
This is something I've been wanting to say , because nobody has mentioned it.
I can't wait to see what Michelle Obama will do, when in the White House. A woman with such a tremendous intelligence and knowledge will be exiting to watch.

We have about 75 days to get used to the fantastic idea of a black family (and their new puppy) in the white house. In February his color will no longer be an issue, then he'll just have to prove his worth as a president, who has some monumental challenges in the inbox; First and foremost the economy but there's also quite a few security issues i.a. Iran, Russia, North Korea, China.... Oh! And then there's a couple of wars initiated by his predecessor and the list goes on. While he's busy assembling his administration, the next few weeks will be a loud and persistent buzz from the flying rumors of the power game now shifting into gear; Who's gonna take what office? This so called "Lame Duck" period will be intense because of the gravity of the financial situation. I bet this will keep us glued to each of our favorite media, just like these last months of intense campaigning has.
After January 20. all eyes will be on Barack Obama, his staff and thee first 100 days of change. Uh, I can hardly wait....
Posted by Gabs at 2:12 AM