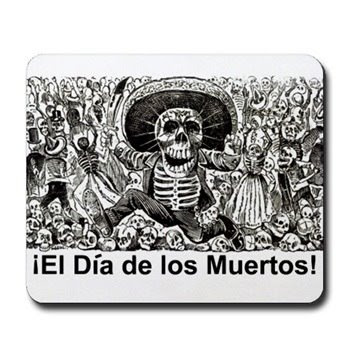 I once read a book by Malcom Lowry called "Under the volcano". It made quite a impact and when I later saw the John Houston film with a stellar performance by Albert Finney as the drunken alcoholic consul in Mexico; it made me weep in public places. The whole book takes place in one and as it turns out; the final day of the consuls life Nov. 2.; "The day of the Dead" or "All souls day" as it's called in Europe.
If you'd ever spend this day in a catholic country, you'll see hordes of people, making their way to the local cemetery, laden with flowers and candles in red glasses.... In Mexico it's a full blown party going on for 3 days... And colorful sugary skeletons fills the stalls and people gather at the grave sites of their dearly departed and celebrate life. Here they leave toys for the dead children and Tequila for the adults.... Candles and candy for everyone!
Today, I thought of and toasted to all my absent friends and loved ones. - And filled the house with lit candles and flowers......
I also lit a candle for Aisha Ibrahim Duhulow, a 13 (!!) young rape victim, who was stoned to death in front of a thousand spectators, when she tried to report the three men who raped her. She'd been accused of adultery by The Islamic Courts and Al- Shabab armed militia, which control southern Somalia. The militia opened fire and killed a young boy, when relatives tried to help her during the stoning.. And shine a light for all the girls and women, who's being trafficked, sold,bought, raped, killed in the name of honour, violated, beaten and discriminated against still in this day and age......
Posted by Gabs at 5:40 PM