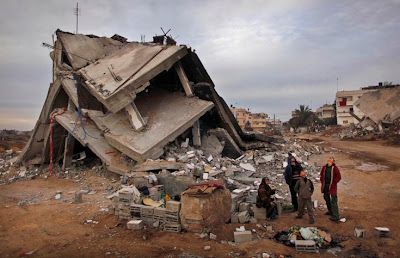 From "Window Into Palestine" - Sunday, June 14

Absurdity Is the Norm in the Gaza Strip

Upon returning home from Gaza, a friend commented, "It must have been horrifying seeing all the destruction." And it was. The 22-day Israeli assault on the Gaza Strip laid waste to an already ravaged territory.

The landscape is dotted with piles of rubble of bombed out buildings, the twisted iron and aluminum of destroyed factories, once green fields reduced to sand and dirt by Israeli tanks, apartments with 2 meter holes in the walls and toppled minarets of mosques turned to ruins.

But as devastating as bearing witness to the destruction was, it was the absurdities of the siege, the total blockade of Gaza imposed by Israel and Egypt, that really affected me. Gaza itself remains frozen in time; for nearly five months after the ceasefire, aside from a few rare cases in which cinder blocks have been used to fill gaping holes in the sides of buildings, no reconstruction whatsoever has begun. The blockade keeps the necessary building materials out of Gaza.

While traveling throughout Gaza with a delegation of mostly U.S. citizens organized by CodePink, the absurdities of the siege presented themselves over and over.

At Al Shifa Hospital, the largest in Gaza, we saw state of the art isotope scan and radio therapy machines in the oncology department that cannot operate because the radioactive material as well as a calibration tool have been refused entry by Israel. A row of dialysis machines sat unused, lacking the required fluids.

As medical conditions in Gaza deteriorate due to the siege, many look for medical care abroad. However, the sealed borders prevent them from traveling. We met the director of an orphanage who had already lost the vision in one eye, was losing it in the other, but had been unable to obtain permission to travel to Egypt for eye care.

Power outages are regular occurrences. The Gaza power plant simply cannot keep up with the demand due to a lack of fuel, which is blocked by Israel, as is supplemental electricity produced in Israel. There are both scheduled blackouts of 8-10 hours, as well as spontaneous outages.

While touring the Al Shifa Hospital, the Minister of Health apologized for the heat in the room, saying their generator must be reserved for higher priority uses than air conditioning. Families are forced to carry their loved ones up the stairs, the elevators shutdown during blackouts.

The centers working to create employment opportunities for Gaza's women inevitably fall prey to the siege. Power cuts bring the sewing machines making dresses and linens to a stand still. Even the embroidery thread used to make traditional handicrafts must be smuggled in through the tunnels.

The siege has also taken its toll on the father figure. According to Dr. Zeyada of the Gaza Community Mental Health Program, with well over 50% unemployment due to the siege, children see their fathers as unable to provide for them. And during the war, they saw that their fathers were also unable to protect them. Children have started looking to other role models, and make easy targets for those who, unfortunately, have no desire for peace.

Education suffers under the siege. At a UN vocational training center in Khan Younis, the library consists of roughly 12 bookcases, but only two had any books at all, with half being photocopied manuals. The textbooks destined for the center have been held up in a storage facility in Jerusalem; the Israelis simply refused to allow them in. The center is also unable to get the raw materials for their metal and woodworking courses.

Sharif, a university student studying business administration in his second year, is understandably proud of having top marks in his faculty. His friends have nicknamed him 'The Genius.' Sharif has been awarded a scholarship at Portland University in Oregon starting this fall. Unfortunately, the irrationality of the siege is likely to prevent him from being allowed to go. “If I can’t get authorization by August, there goes my scholarship.”

A professor at Al Aqsa University has been offered a position at the University of Manchester, however, he has been denied permission to travel. Professors are also unable to travel to attend international conferences. And students of the English department have a tough time finding native speakers with which to practice the language; getting into Gaza is almost as difficult as getting out!

Numerous projects for which funding has already been approved are currently suspended for the simple fact that the materials to complete them are not allowed in. Turkey has donated funds for a new university library and PalTel, the Palestinian telecommunications company, has allocated funds for an Information Technology Center. Both projects remain in limbo, victims of the siege.

An official with the UN Relief and Works Agency remarked that it is also a problem to get the actual banknotes in. UNRWA, which provides services to more than 1 million registered refugees in the Gaza Strip, is often only able to get money in to pay the salaries of their 10,000 employees, while money to fund projects is blocked.

Not only are Palestinians restricted in their movement in and out of Gaza, but also within. In late May, Israel began dropping thousands of leaflets near the border areas warning the people of Gaza not to come within 300 meters of the border or they would be fired upon. Farmers are forced to risk their lives in order to work their fields that fate has placed too close to the border. The same restrictions are imposed on Palestinian fishermen. The sound of shots pierce the silence nightly, as Israeli gunboats fire on fishing boats that dare to venture far enough away from the shore in order to catch fish to sell and provide a living for their families.

These are the absurdities that have become the norm in Gaza. But perhaps most absurd of all is how anyone can believe that Israel's severity in the closures, the destruction of the economy and social fabric of the Gaza Strip, will serve to convince Palestinians to place their trust in international law.

What we in the international community must do is to heed the call we heard repeatedly from the people of Gaza: work to break the siege so that they can take care of themselves.

Stephanie is a founding member of U.S. Citizens for Peace & Justice in Rome, Italy - http://www.peaceandjustice.it  and currently serves on the group's coordinating committee.