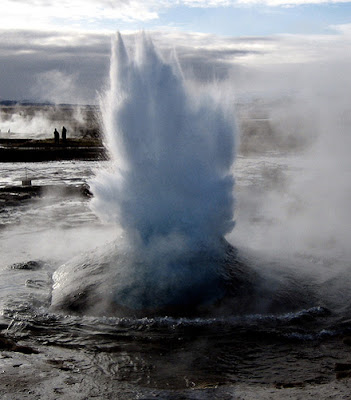 Now, I'm a victim too, of the Fannie Maes and Freddie Macs of the world... Or more acurate; I'm a victim of the mighty Viking hubris... ; The flight I bought for Amsterdam in Dec., is now only valid for a round trip to NothingButaSaga-land and it's not refundable, thank you!
In the late 1990's, young Icelandic men, descended in hordes, like their forefathers before them. But this time, the vikings had come as businessmen and they vigorously bought everything they could lay their hands on...
The era of the Geyser economy was in full boost-  In Denmark they bought the oldest and most prestigious department store; Magasin du Nord. And then they noticed the old man Mr. Maersk's ailing airline; They changed the name to Sterling, even though the service was far from it, but it did have the advantage of super low airfares... the only low budget airline in DK. -  So naturally I booked my christmas trip there, when I had decided to see my oldest and dearest child in Amsterdam. Last night, Sterling Airways was the second Icelandic company to go belly up.... ! - And Iceland as a nation, is only a negative answer away, from going bankrupt too...!
When I heard of this, I called my favorite Expat. and while she was mumbling soothing sounds into my ear, I could hear her tapping the keyboard in the background.
And this is what she found to replace me:
I'll proudly introduce the next best thing to a visit from home;
You know the kind; A familiar face, who arrives just around the hollidays, loaded with all the necessities for, say; a real christmas,  all the various goodies, you just can't do without, if you live abroad and wants to recreate the perfect christmas of your childhood... Not that such a thing exist, any where else than in your stressed-out mind, but still... If you, as a Dane, can't bear to see a tree without small redandwhite drums or flags, if you need the cherrysauce or the special fat rice for the christmas pudding, ... or if your kid misses  his favorite Danish magazine/book/DVD/CD/Game...? If you want to give someone, a special Danish Design gift ? then - Ta-da; "Homesick"
"Hjemve" is the very site for you... They ship worldwide!
Psst; If you know a Dane, who's far from home, you can give them a gift-card to the site, and earn their eternal gratitude.... Me thinks.

Mom, I was really looking forward to see you, I even arranged to be off every day of your stay. And I do think it's terrible that you can't get your money back!!!
the only reason why i was so happy that i've found that site, is i thought it could save you a lot of money!!! money i'd rather see you use to get another ticket, than to send me things!
Don't get me wrong, the packages with goodies from back home, is well appreciated, and i'm grateful that you take the time to send these things to me, like my crosswords... every morning/afternoon whilst being on the train, i solve crossword puzzles, it helps me relax and clear my head. And I can only do this, because you've taken the time to buy and send them to me!!!

Hey, I too was devastated that you lost your ticket!!! And i'm very happy that you've got antoher one!
I look forward to see you here...
big hug N