The windmills of his mind..

I'd tuned to CNN.. And again I saw John McCain bashing his opponent, re- repeating his punchlines... He does that a lot... It's like, why give up a good line, just because you've used a hundred times before? This time it was the one that goes like this; " If Obama wanted to run against George Bush, he should have run for office, 4 years ago!" and then it was the line about earmarks, going on about telescopes... and the one about socialism, spreading the wealth.... And on it goes...;
He makes me think of Don Quixote; The old warrior stuck in a moment in his past, fighting  a lost cause; The windmills! Unfortunately they are only in his head.. You can even say, that the old Knight, was a kind of "Maverick" in his time... But a true one, as opposed to McCains illusory "Lone rider" And that McCain's dark fiery eyes is betraying his anger,  ambition, power greed, and something as human as
"living up to the old man"... (McCain the father; The admiral, went through the same thing with his dad; John McCain's grandfather; who was a admiral too!) When asked; What do you think of Colin Powells endorsement of Obama? His repeated auto answer is listing the 4 secretaries of State and more than 200 generals and admirals on his side... Kinda like the kid telling you; My dad is bigger than yours...
Then I read an article in Rolling Stone issue 1063, written by Tim Dickinson, a member of the Republican Party and who voted for McCain in 2000 in the California Primary.
And that background article, rattled me... McCain; A man I thought of as; An old warhorse fighting a lost NeoCon cause, going a bit deaf, from too much drumming.....  But, as it turns out, it's his own drum, he's been banging all along while doing the navy-ditty "For the love of the country"!
The reasons why his own party mates is turning their backs on him, and especially the Republicans in the US Military, who are not as easily fooled by his pilot bravado, as the rest of the nation. All this becomes much more understandable and crystal clear to me, after having read this well researched piece. It's filled with a vast amount of interviews with firsthand sources. This reckless and raging old man is such a fraud... .
A man of such mediocrity (He graduated 894 out of 899!!) his only means to rise to power is by nepotism, sucking up and manipulating the media with half truths and whole lies...  Some of the far out  and dishonest statements in the article, is quotes from his autobiography, as tainted as it is, by his selective memory and fact tweaks!
McCains erratic, hotheaded and impulsive character, has these very traits in common with my ancient warrior... and then I didn't mention McCains long career in womanizing and that Quixote loved his damsels as well.... But the old Don is basically harmless and John McCain is anything but! If that man comes into power, real power; we'd better run for the hills and start stocking up on food and what else we might need, in order to survive another great war!
I wouldn't want either
John McCain the Maverick with a rusty honor
or
Don Quixote the Knight in rusty armor
as
the most powerful warrior in the world - 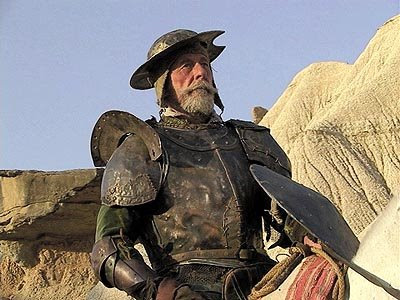 -This is Don Quixote endorsed by Sancho Panza just like John McCain has been endorsed by Al Qaeda on their website.. (",)
And McClellan (ex White House Press secretary) has now endorsed Obama - Yet another Republican has crossed over from the "Dark Side" - (",)
But what never ceases to amaze me; Is the fact, that The Leading Nation of the Free World,  apparently hasn't invented a voting process and tools, which works in a infallible manner and without hiccups! The whole process is outrageously time consuming and troublesome......
And then I'm not saying a word about the whole voting system of electoral votes and so on!
Posted by Gabs at 10:59 PM

I wouldn't vote for a guy who can't use a parachute properly. Seriously though, can you imagine Sarah Palin as the President? I'd start stocking up on tinned food and head down into the basement.