The isolation of the abandoned ! 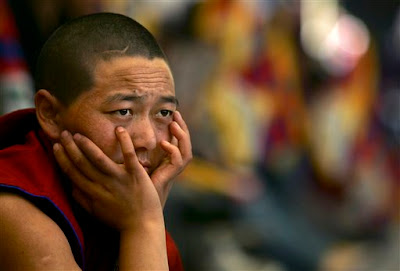 Last year, during these days of March, Tibet saw a riot against the Chinese oppressors which surprised not only the Chinese Government but also the rest of the world. It's been 50 years of exile for the Dalai Lama who spoke harshly against China for the very first time, calling Life in Tibet "hell on earth" (Full speech)
China has now clamped down with massive troops movement into the region and Internet/cell phone net is partially closed. No foreign journalist or tourists are allowed in; "for their own safety" in order to isolate the people of Tibet.
New York Times have a very good and in depth series of articles on the isolation of Tibet and on the official Chinese version of Tibet's tortured history and how China portrays the Tibetans in the rest of China, as bogeymen, who have to be feared and Dalai Lama as "a Jackal in monks robes"
I think the West lost a great opportunity to actually apply pressure on China with the Olympics 2008! It was a show of good intentions, which in the last minute caved in to the Chinese government and their brazen-faced denials of any problems in Tibet or anywhere else in the great "Democratic" state of China.
After the cheering of the winners, the tears of the losers and the awe of the final fireworks; The Olympics closed down and the circus moved elsewhere... And then we lost interest or have simply forgotten the suffering people on the roof of the world. - A bit like Burma/Myanmar - Apart from one Danish director Anders Østergård - But more on him later....
Posted by Gabs at 1:14 AM