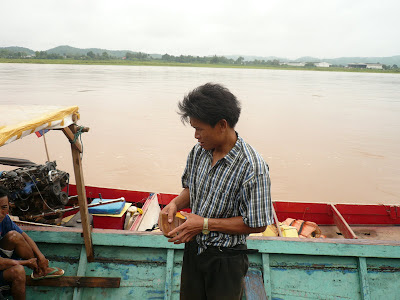 This is our River Pilot and the red boat is the one we came down in, he diden't let me take a photo of the whole boat.... He has just recieved 3.500 Baht (About 104$ - In Laos an average annual wage is 600 $) And the ride was worth every cent, penny or øre! He then jumped back in... And whoooosch, off he went; for the Thai side of the village - most probably to spend a little dough.....  Check my "Flickr" for more photos! ( Look for link in sidebar)
Must say I had some great moments of happiness, sheer joy of just being alive,-  and able to see all what I've seen, down the dirt roads to Xian Kok and later caged in the "Longtail speedboat", "enjoying the moment"on the Mekong... ; The green Monsoon forest on both sides, only marred occasionally by big wounds of logging sites.. Sometimes a small bamboo village on stilts would come in view, looks like someone with a very big hand, with just flicking the wrist, just threw the huts up and down the steep hill sides.. And on the Burmese side, a big old monastery with about hundred of Stupas... A fantastic sight, and feeling a pang of
sorrow for the people of Myanmar.... I would have loved being able to have taped and recorded for posterity; this wonder ride....The green, blue mountains, sometimes partially hidden in the mist, suddenly reappearing as giants guarding inland... No blue sky, no sun to speak of... Just mist and the brown river....  But what a river, for the first time really feeling the strong currents, the whirlpools that seems like deep, dark holes, and the water whirling down like in a sink, but with so more power, we are skipping and at times appear to be flying over what must be stones just under the surface, thus creating white tipped waves and if much more of these traitorous patches, then this would have been "whitewater rafting" in a stiff wooden, but elegantly long and slender... And most important; flatbottom boat, with the mother of all outboard engine aft... The Pilot/ driver  ( This has been discussed at length: Which term do you use?) must have been doing this since he was kid, course he knew, at all times exactly where to go and when to go full throttle and when to take it down a knotch... He used the width of the river an
d zigzagged us down safely to our destination; The small town (?) of - (You must wait with exact location until my last package comes through from Thailand, where my notebook is buried! ) If you want to see some photos taken in 2003 and skim the somewhat rather long article about this whole area; Mong Seng, Mong Long and Xian Kok, then this one is from Oxfam... But it shows clearly, what a bustling place it must have been only 5 years ago.... And the high hopes and expectations the authors expres is almost heartbreaking, when you see the same diminishing towns/villages, closed down markets and empty roads today... It's all gone today and theres only a lot of gathering dust ...... I wonder what went wrong ? 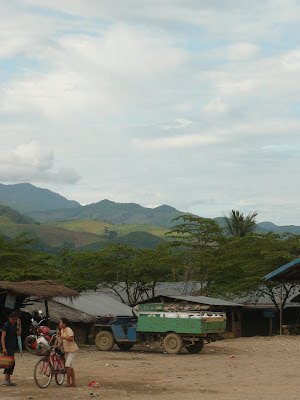 We were quite unceremoniously dumped on the bank of the village mooring point with all our stuff. But here there's a rather steep stair to climb, all the way up to the fast gathering and gawking crowd feasting their eyes on the sight of three kinda wild looking white women......Hollering and jumping with the joy of  two hrs of  high speed and the adrenallin rush/kick of it all ... Man oh man, it's difficult to put into words the feeling of being high, tipsy and a basic  sense of freedom, but it's a highly recommendd cocktail!... The speed stayed with us, so instead of taking a moment to digest all these mixed emotions, so we plodded on to find a vehicle to take us to Huay Xia... Our next port of destination.

We got us a "jumbo"- the flatbed truck, and started out of town.. then the driver got a call, apparently, cause we made a u-turn and went back to pick up a very sick girl - she was about 10- at the country hospital... So now we sat there, taking
turns with her parents to hold her saline drip high for the next 60km on unpaved roads.... I tried to explain that setting up a hammock, maybe would have been more comfortable for the poor lass, but hammocks are not much seen up here and they just smiled and nodded their heads at me anyways.... -
Saying "no" is Soooooo impolite in Asia... Which is why you sometimes have endless discussions just to find out, that the person you're talking to, is just trying desperately to figure a way to tell you NO.... Jeeze, Until I understood that fully, I've wasted long and desperate time, carrying a full pack in the pouring rain.... settling on a price for transport... just to be told that the boat is full of water = NO! - The driver seemed to take very careful aim at each and every pothole on the way, and the patient groaned every time as to keep count.... But everyone survived, kinda, and made it into town...

Huay Xia; Is the border town to Thailand and like all border towns full of scams and unfriendly people... And travellers/tourists of all origins, but most with only one destination; Luang Prabang... Two days down Mekong on "The Slow Boat" - with a onenight stand in Pak Beng...
We got our tickets to the boat, and we parted ways with our sweet Swedish space cadet, she was taking a tour into the "jungle" pronounced djungle in Swedish-English, (Remember the Swedish woman in "Soap"?) She was going on the "Gibbon experience" - Not withstanding that only very rarely do you see any monkeys, not even the guides! And they charge 380 USD for you "trekking" most of the way and to live in a treetop hut for two nights!... Every one to her own!

We; The really nice Kiwi and I opted for the "Slow Boat"which was something of a let down! You're supposed to fit your Western bum unto wooden benches made for Asian backsides... Not the same size...! They were about 20-30 cm wide!!!! But after all the in dept discussion in Xian Kok, of my least favorite anatomy parts (Ass, legs and over-arms and some giggly remarks from the Burmese about the uncomprehensible size of my nose) I was not gonna be the first to make a comment! In the end I sat my self on the mountains of backpacks and were finally able to relax... The boat was chock full of "Tour bussing/Package trip" from Chiang Mai, Thailand... Backpackers in all shapes, forma and origens... (Also with a noticeable difference in walletsize)  A lot seemed to have been hurt, as several came in crutches, arms in slings and in general disrepair! It was excruciatingly uncomfortable... But must have been hell for the injured, but they managed with a bottle or two of Vodka...+ the cold BeerLao for sale on board.
The heat and roar from the engine was tiresome... But up front, on my mountain, I could actually hear the water sloshing up the hull and enjoy the forested mountains... At one point I looked down on my fellow passengers and every one, who was not asleep, was reading... With the local passengers (Of which there were some, incl. the usual heaps of luggage, livestock etc etc) looking on... In Laos there is no books, except schoolbooks! No fiction, no picturebooks for kids.. in Lao ...Nothing, but the communist manifest that rules the country.... After this 8 hr hell we landed in Pak Beng, where we found a ok guesthouse and a great Indian restaurant... There is no electricity in Pak Beng, so the generators only run to 7 AM-10AM, That means that about 11Am the room is so 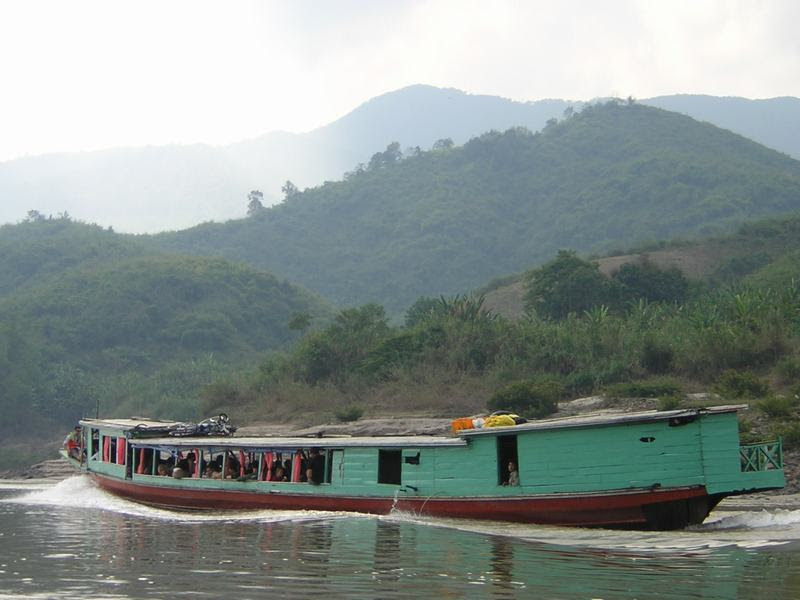 stifling hot that you wake up gasping for air... it actually feels like you are being choked.... One should not rush in, but leave the backpack on the key and wander up and take a closer look at the different options.... You have to choose it wisely, ( A window that looks onto the river and a minimal breeze) And not like I did, rush into the first, the best and took a room with a window to "High street" and all the drunken banter, singing and goring ons to 2-3 o'clock from fellow travellers.....
Supposed to leave at 8:30, we only had to wait for the last 3-4 "Falangs' come leisurely strolling down the hill at 9:45 - Grrrrr!! But thank The great Naga (The river god) we had a change of boat, now with fewer wooden benches and the whole area up front with just the planks and nothing else; which meant one could lay down... And actually stretch your legs as well... for another 8 hrs..........!!!!!
But at the end of the rainbow is not a pot of gold, but the giant golden Stupa perched on top a hill overlooking the World heritage town of Luang Prabang with 39 Wats and the french colonial architecture at it's best preserved and the famous night market, the allure of which, I've only just now, a week later, unloaded 6,75 kg in the post office here in Ko Tao in Thailand.... But more of that later... Yet another trip up river ... later....!
Posted by Gabs at 4:15 AM