"Puppet on a string" 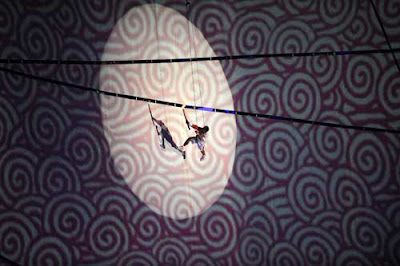 Was that strong symbolism ? - The image of a fleeing (?), running Chinese puppet on a string, lightning the Olympic flame, in front of 40 billion viewers Worldwide..........?!!!!
The first "On Camp" calamity has already descended on the "Games"
( Can we still call this very serious politically defined, big bucks merry-go-round   for "games" ? And do so in earnest?)
Still makes me wonder about the reasons; apart from the obvious, ($ & politics) which persuaded the band of old men in suits aka; The Olympic Committee,
in giving these "games" to a regime of self professed enemies of basic human rights.
Ruled openly AND secretly with a massive oppressive law and military enforcement
in the first place???
How about OL - Rangoon, Myanmar in 2016 and OL- Darfur, Sudan in 2020....??!!
Here's a list of possible contenders....
-0-
PS; This was just a very pressing "aside"  - The end of my SE Asia road trip soon to appear.. And then comes the 8 day  Clipper cruise and finally I'm up to date.... Phew!
Posted by Gabs at 4:43 AM