"You got me flipping like a flag on a pole" 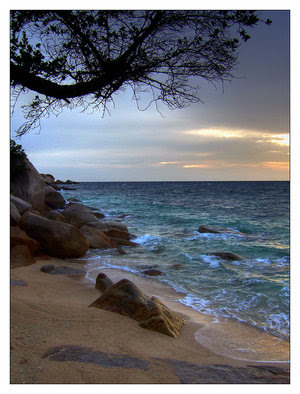 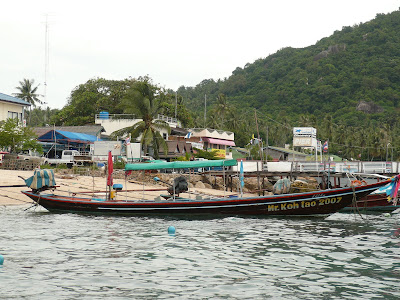 I stayed at the hippiesque "Moondance"  for the last 10 days of my time in SE Asia.... Just didn't want to move...At first the colored flags were a bit suspicious... I'm not really into the hippiedippie scene.....  The round huts with outdoor showers, the "bathroom floor" made entirely of pebble , bits of white coral and small shells... Well, the entire place is made from materials found; Either washed up on the beach or from the surrounding small palm forest - All these details + the fact that owner; Mama Pa gave me the front hut/room, which meant; That I could see the sunrise and the blue, blue ocean without getting out of bed, quickly won me over and made me a smiling, suntanned, lazy sack of bones in no time....
Days were spend with the family and their friends; Mama Pa (Their only son, a big fella of 12, lives in Surathani)
- Pa's husband; Hong, who, like a lot of Thais, just adores to gamble...He'd go off every day and gamble on the "Fighting fish" !! He would then come home and lie about the winnings, always winnings, never ever lost and always exorbitant sums of Bahts- The fights are basically the same principle as "Fighting Cocks", just that these fish is the size of a small goldfish and apparently they fight each other till death or exhaustion sets in- Women are not allowed at such serious endeavor - But it works out just grand! Because the women then have the peace and quiet to keep the wheels turning, without time wasting interference of ignorant husbands/brothers/fathers/sons in the family business. In Thailand and most parts of SE Asia; 99% of all business's' belongs to the female part of the marriage anyway, women own the land/house etc.... A strong and well functioning matriarchy....
-  At the "Moondance" theres some nice staff; The very friendly Burmese refugee; Than, who lives and works in the downstairs/beach bar and cleaning the grounds. He'd send home some money every month to his parents, who'd stayed on in Myanmar... I've never seen a smile as big as his, when I said, that yes; I knew of his all time heroine; Aung San Suu Kyi... But then again, he was one of the sweetest and smartest young men, I've met in a long time. we communicate with signs, gestures and basic english in the style of " Me Gabby, you Than".... And Kim, the cook who makes delicious food when not on the cellphone... It seems to be a physical part of her body, maybe clued onto her hand cause she never puts it down... She smiles a lot...
These 10 days were an endless parade of delight and treats; Special prepared family dinners, games played in the shade of the coconut palmtops, sharing afternoons with Pa, at the local  massage/pedicure parlour in the small town; Ban Chalok Ban Kao nearby, 15 min by foot - Up the hill and down to the bay, over the walking bridge and Voila!; One's back in real life, with the mandatory diving shops, great beach/shoreline bars with chill out music/ fire artistes ( Ibiza, eat your heart out!) internet cafés, food shops, travel agents, clothes shops and of course; the local '7 eleven'.....
- But above all; We had a whole lot of laughs, lots and lots of laughs and tons of easy smiles..... A few times, I had to tell dear Than to change the music, when he's played the same Ben Harper for 6 consecutive times, but he quickly sussed out my preferences...... And good times with the other guests too, but they mostly only stayed a few days... Made me think of good pal Mike, the Globetrotter, from Liverpool ( A single traveller of 55 - Now in Borneo, checking out his mates: The orangutans.... ) on the island of Phu Quoc, Vietnam; He stayed at that place for 3 weeks and saw heaps of  "change overs"
To top things off; 10 days of lodging + food/drinks = 200 $  (Not as cheap as Tat Lo in Laos:  5 days of food and a room w/fan = 10 $ - but then Moondance were much more luxurious in every way, than "Mama's" at the waterfalls...)
I would love to revisit the rustic charm and the warm hearts of this particular paradise! 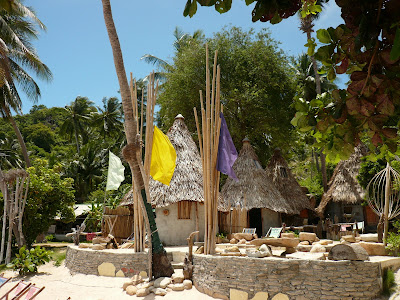