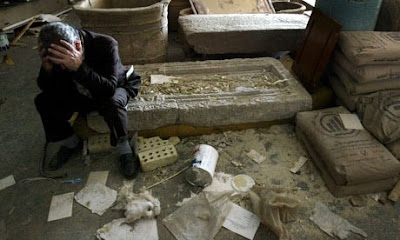 Okay, Rumsfeld isn't known as the most cultivated guy, but his flippant remark to the looting and destruction of The Iraq National Museum; "stuff happens" seemed cynical to all of us, who'd already shed tears when the bombing of The National Library in Sarajevo burned down thousands of irreplaceable old manuscripts.
But being a long distance witness to the greedy looting of the National Museum in Baghdad in 2003, while US troops and their allies stood idle by, was more than some us could bear. As in Sarajevo it's our history, that's forever lost - And for the peoples of the nations involved, it's a catastrophe beyond words - when you lose your past.

Thousands of works, some over 3.000 years old are lost! Artifacts, Jewelry and object's d'art, some of our civilizations earliest, are gone forever. They are now sitting in secret vaults all over the world, now only for the pleasure of the very few.
The Museum is now (partly) opened, but only half of the sad remains of this invaluable collection will be at display and only for VIPs ?!? 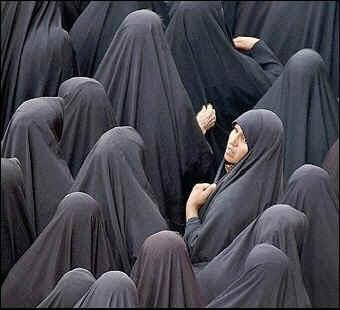 A lot of Iraqis showed up for the big opening, clinging to the iron gates surrounding the Museum. These people were not hoping to see the small exhibition, but rather to get a glimpse of the Prime Minister, while shouting out their needs and their despair. Most of the women there, being some of Iraq's 740.000 widows, most who do not have roof over their heads, neither them nor their fatherless children. These are the true victims of the Iraqi violence. remember the celebrated "shoe thrower"? He did this stunt for the Iraqi war widows and the orphans.
These women was before protected by the extended support system of family, neighbours and mosques. But as the war drag on and on the needs far exceed available help. Iraqi charities are closing down one by one as no help comes from the government or anywhere else.
Some of these widows becomes homeless beggars sifting through garbage, standing outside the mosques asking for handouts or they become prostitutes and some joins the insurgents, becoming suicide bombers for money.
The vast majority are forced into "temporary marriages" - ( Shi'ite trad.) often based on sex, some for hours, some for years, and in this way gets help from government, religious or tribal leaders. A war widow neither has the money nor the clout to pay the bribes needed to oil the offices, where war widow benefits are distributed [50$ a month]
The latest plan from the director of "Baghdad Displacement Committee" is to pay men to marry widows. When asked , why not give the money directly to the women instead? He laughs this preposterous idea off with a; " They'll only spend the money unwisely because they are uneducated and don't know about budgets!" ?!?!
It's the women and the children who pays the full burden of war, in Iraq, Afghanistan, Gaza or anywhere else in world where violence is the order of the day...
Read more in The New York Times
Posted by Gabs at 8:37 PM