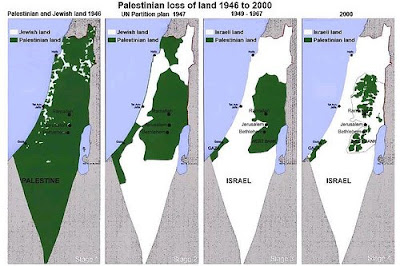 In 2005  a group of young female Zionists, finds a riggity, but livable old barn under the shadows of ancient olive trees... The fact that the gnarly old olives is owned by a Farmer; a Palestinian woman, didn't faze the youngsters in the least.... And the squatters settled down for good, saying that they didn't need the Israeli government or any laws to tell them, wherever they could stay or not. They had the only "document" needed; The Bible! The good book telling them that they had the divine right to live there... They are still on the old woman's land and every year, they take a bit more of her lands.... This is what the Israeli Government calls; "A illegal outpost" of which they have no control or knowledge!
(If you ask yourself why the old farmer didn't complain, then you should know that only a mere 8% of all Palestinian complaints result in indictment!)
I Had an in depth Post, halfway written. The post being about the uncovering of the "Spiegel Database of Illegal Israeli settlements" by the Israeli newspaper Haaretz   - These settlements being the main issue and threat to lasting peace in the area... But alas, time somehow escaped me and you'll only get this short version;
The Israeli Government has always distinguished between "legal and illegal settlements on occupied Palestinian land" - Saying they have no knowledge of the amounts and whereabouts of the illegal outposts. But neither the "legal" nor the "illegal" is legal in any way, according to The Geneva convention.
And this database/report now shows, without a shadow of a doubt, that the Israelis are and have all this time been fully aware of how and when...!!
I just wish that George Mitchell, the US envoy to the Middle East, would have this report in his suitcase, and be the first foreign diplomat openly criticising the Israelis for their policies of cont. land stealing.
Link to the Human Rights Org;
"Yesh Din" promising legal aide for all Palestieans, who wishes to sue!
Link to the original programme in Danish. DR radio P1;
"Orientering"
Posted by Gabs at 6:06 PM