Another Email from inside Gaza 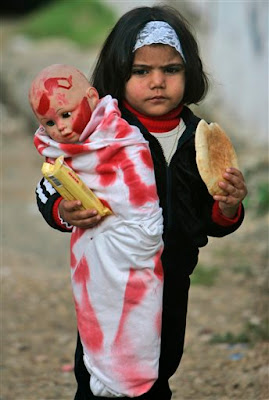 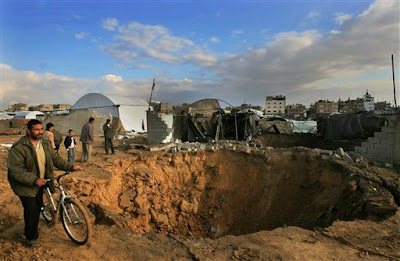 Vittorio Arrigoni on the ground in Gaza, January 9, 2009

My toothpaste, toothbrush, shavers and shaving foam. The clothes I'm wearing, the cough medicine I'm using to get rid of a persistent cough, the cigarettes I bought for Ahmed, and some tobacco for my arghile. My cell phone, the laptop onto which I compulsively type my eye-witness accounts from the hell surrounding me. All that's needed for a modest, yet dignified existence in Gaza comes from Egypt, and arrives on the shops' shelves through the tunnels. These are the very same tunnels that the Israeli F16s hasn't stopped heavily bombing in the last 12 hours, destroying along with them thousands of Rafah houses near the border.

A few months ago I had three teeth dodgy fixed, and at the end of the operation I asked my Palestinian dentist where he'd gotten all of his dental equipment from – the anesthetic, the syringes, ceramic inlays and all the other tools. With a sly look on his face, he'd made a certain gesture with his hands: from under ground. There's no doubt that through the tunnels underneath Rafah, explosives and weapons were also smuggled, the very same that the resistance is using today to try and contain the terrifying advance of the armour-plated Israeli death-machines. But it's next to nothing compared with the tons of consumer goods flowing into famished Gaza under this criminal siege.

It's easy enough on the internet to find photos documenting how even livestock comes in from Egypt through the tunnels. Sedated, strapped-up goats and cows are lowered into an Egyptian well, re-emerging on this side to provide milk, cheese and meat. Even the main hospitals in the Strip stocked up surreptitiously at the border. The tunnels were the only resource allowing the Palestinians to survive the siege, a siege which long before the current bombings, was the cause of a 60% unemployment rate and forced 80% of families to live off humanitarian handouts.

Our colleagues at the ISM in Rafah describe the umpteenth siege that they witnessed. Caravans of desperate refugees leaving their homes facing Egypt, on mule-drawn carts or hodgepodge vehicles. A déjà-vu scenario – in previous days, leaflets were raining down from the planes intimidating the Palestinians into evacuating. Since Israel always keeps its threatened promises, bombs are raining down from the planes now. Today's new homeless will spend the night with their relatives, friends and acquaintances in Gaza. No one dares crowd the United Nations schools anymore, after yesterday's massacre in Jabalia. But a considerable number haven't gone anywhere, as they have nowhere safe to go. They shall be spending the night praying to God that they'll be spared, since no one on earth seems to take any interest in their existence.

The death toll at present is at 768 Palestinians, with 3,129 wounded, and 219 children killed. The count of civilian victims on the Israeli side is thankfully still only at 4. At Zaytoun, an Eastern neighbourhood of Gaza City, the Red Cross ambulances could only rush to the scene of a massacre after several hours, under the coordination of the Israeli military summit. When they finally got there, they picked up 17 corpses and 10 injured, all belonging to the Al Samouni family. A perfect execution: in the tiny bodies of the children it was possible to notice bullet holes rather than wounds caused by shrapnel.

The last two nights in the Gaza City hospitals were quieter than usual, as we assisted a number of injured in the tens rather than the hundreds. Obviously after the massacre at the Al Fakhura school, the Israeli Army surpassed the daily budget of civilian casualties as an offering to its blood-thirsty government in view of the imminent elections. We have an inkling that tonight the morgues will once again be filled to bursting point.

With our sirens screaming, we continue to rush pregnant women into hospital as they give birth prematurely. It's as if nature and the conservation instinct were inducing these brave mothers to predate the arrival of these new lives to make up for the growing number of dead. These newborns' first cry, when they survive, can for a moment cover the rumbling of the bombs.

Leila, a colleague at the ISM, asked our neighbours' children to write some of their impressions on the atrocious tragedy we're enduring. Here are some extracts of their words, the horrors of war seen through the pure and innocent gaze of Gaza's children:

Suzanne, aged 15: "The life in Gaza is very difficult. Actually we can't describe everything. We can't sleep, we can't go to school and study. We feel a lot of feelings, sometimes we feel afraid and worry because the planes and the ships, they hit 24 hours. Sometimes we feel bored because there is no electricity during the day, and in the night, it is coming just four hours and when it comes we are watching the news on TV. And we see kids and women who are injured and dead. So we live in the siege and war."

From Fatma, 13: "It was the hardest week in our life. In the first day we were in school, having the final exam of the first term, then the explosions started, many students were killed and injured, and the others surely lost a relative or a neighbour. There is no electricity, no food, no bread. What can we do - it's the Israelis! All the people in the world celebrated the new year, we also celebrate but in a different way."

From Sara, 11: "Gaza is living in a siege, like a big jail: no water, no electric power. People feel afraid, don't sleep at night, and every day more people are killed. Until now, more than 400 are killed and more than 2000 injured. And students had their final first term exams, so Israel hit the Ministry of Education, and a lot of ministries. Every day people are asking when will it end, and they are waiting for more ships with activist like Vittorio and Leila."

Meriam is four. Her siblings asked her, "what do you feel when you hear the rockets?" And she said, "I feel afraid!", before running to take cover behind her father's legs. 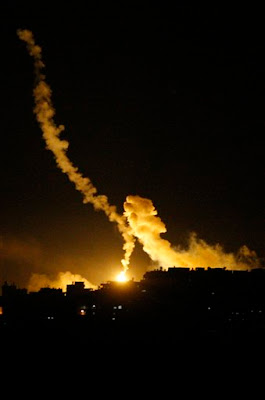 Gaza is sadly shrouded in obscurity in the last ten days. I can recharge my computer and phone only in the hospitals. We watch TV with the doctors and paramedics while waiting for an urgent call. We listen to the rumblings in the distance, and after a few minutes the Arab satellite networks refer exactly where the explosions take place. We often watch ourselves pull bodies out of the rubble, as if having seen it all in the flesh weren't enough already. Last night I switched over to an Israeli channel with the remote. They were showing a traditional music festival, complete with scantily-clad showgirls and firework displays in the end. We went back to our horror, not on screen but in the ambulances. Israel has every right to laugh and sing even while they're massacring their neighbours. Palestinians only ask to die a different kind of death – say, of old age.

Link to "The Free Gaza Movement"

It is not often that I enter a site and immediately am struck by the pictures chosen to demonstrate such a call for the cease of the Israeli aggression (genocide) against a peoples.

You've set my muse's soul to engage and she assures me that tonight I will write based on what I have read and seen here. Thank you.