Email from Vittorio, still in Gaza 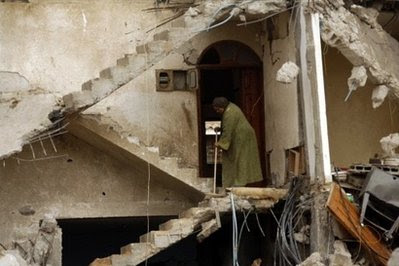 In Gaza, only the dead have seen the end of war.

For the living, no truce can make up for the daily battle for survival. They have no running water, gas, electrical power, and no bread and milk to feed their children. Thousands of people have lost their homes. Humanitarian aid seeps through the passes in drips and drabs, and you get the feeling that the benevolence of the killers' accomplices is only temporary. Tomorrow, Ban Ki-Moon, the UN's Secretary General will travel to Gaza, and we're pretty sure that John Ging, Chief of the Palestinian Refugees' Agency, will have many stories to tell him after Israel bombed two UN schools, assassinated 4 of their workers, bombed and destroyed the UNRWA centre in Gaza City (which reduced tons of medicine and food supplies destined for the civilian population to ashes).

Gaza's mountains of rubble continue to spit corpses back up to the surface. Yesterday, between Jabalia, Tal el Hawa in Gaza City and Zaitun, the Red Crescent paramedics, with some help from the ISM volunteers, have pulled out 95 corpses from the ruins, many of which are in an advanced state of decay. Walking through the streets of the city and no longer feeling constantly terrified by the thought of a bomb surgically aimed to decapitate me, I still tremble at the sight of stray dogs gathering in a circle, imagining what could reveal itself before my eyes as their meal. The relieved men go back to hang out in their mosques and cafés, but their attitude of feigned normalcy is easy to detect. Many of them have lost a relative or have nowhere to live.

They pretend to go back to their everyday routine to boost their wives and children's  spirits – somehow, even this catastrophe must be dealt with. This morning we drove with some ambulances to the most devastated neighbourhoods in the city, Tal el Hawa and Zaitun. Questionnaire in hand, we went door to door and compiled a list of the damage suffered by the buildings , and wrote down the families' most urgent requirements: medicine for the elderly and sick, rice, oil and flour, basically the essentials to feed themselves. All that we've been able to give them so far are metres of nylon, to be used in lieu of their shattered windowpanes to block out the cold.

ISM colleagues in Rafah informed me that the municipality has handed out a few thousand dollars – mere pennies – to the families who've had their houses completely razed to the ground by the bombs, the very same that according to Israel, had been dropped to destroy the tunnels. After the end of the conflict with Lebanon, Hezbollah donated millions of dollars in cheques, to refund the homeless Lebanese citizens. In Gaza, under siege and embargo, Hamas is barely able to refund its people with what "will scarcely be enough to rebuild a barn for livestock", says Khaled, a Rafah farmer.

The truce is unilateral, hence Israel unilaterally decides not to respect it. Khan Yunos, a Palestinian boy, was killed yesterday, and another was injured. East of Gaza helicopters have showered a residential area with white phosphorous. The same happened in Jabalia. In Khann Younis today, the war ships fired their cannons at an open plain, thankfully without harming anyone. But while I write, the news of storming tanks has just reached me. We're not aware of any Palestinian rockets having been fired in the last 24 hours...

International journalists are clamouring for news all along the Strip, as they only managed to get in today. Israel granted them a pass only now that the massacre is winding down. Those who got here in the thick of the battle have seriously risked being killed, as I was told by Lorenzo Cremonesi, a correspondent for Corriere della Sera. Israeli soldiers shot potholes into the car that he was traveling in . Standing by the blackened skeleton of what remains of Al Quds hospital in Gaza City, an astonished BBC reporter asked me how the army could possibly have swapped the building for a terrorists' den.

I said: "For the very same reason that children running away from a burning building were put in  sight of the snipers on the roofs, who don't hesitate to kill them, spreading their grey matter all over the road", to which the journalist furrowed his brow further. The enormous difference between us eye-witnesses and first-hand victims of the massacre, and those who hear about it through our stories, is now further highlighted. From Rome I'm told that the EU intends to freeze the funds assigned for the reconstruction of Gaza as long as it's  governed by Hamas. The European Commissioner for External Relations, Benita Ferrero-Waldner, has made her point clear on this score. "The aid for the reconstruction of the Strip", stated the European diplomat, "will only arrive if Palestinian President Abu Mazen will once again re-establish his authority over the territory."

For Gaza's Palestinians this is an explicit invitation from the outside to engage in civil war, or in a coup d'état. It's equivalent to legitimising the massacre of 410 children, who died because their parents chose democracy and freely elected Hamas. "The EU is diligently echoing the criminal policy of collective punishment imposed by Israel. Why not entrust the funds to the UN? Or some governmental organisation?" "The Unites States are free to elect a war-monger like Bush, Israel can choose leaders with bloodied hands like Sharon or Netanyahu, but we, the people of Gaza, aren't free to chose Hamas…", suggested Mohamed, a human rights activist who never voted for the Islamic movement himself. I have no arguments to contradict him.

The surviving Palestinians learn from their dead; they learn to live while dying, right from the tenderest age. Truce after truce, the general perception here is that of a macabre pause between one massacre and another during which to count the dead, and  peace has never felt so elusive. Scouring Gaza City on board an ambulance with the siren switched off for once, the war is still everywhere, among the ruins of a city robbed of its smiles and now populated only by frightened gazes, eyes that insist upon scanning the sky for planes still endlessly flying overhead. Inside a home we visited with some paramedics, I noticed some pastel drawings on the floor. It was clearly a child's hand that had abandoned them after evacuating the house in a mad rush. I picked one of them up – tanks, helicopters and a body in pieces. In the middle of the drawing a child with a stone had succeeded in reaching the sun's height and was damaging one of the flying death machines. It's been said that in a child's drawing, the sun represents his desire to be, to appear. The sun I saw was crying tears of blood in red pastel. Is a unilateral truce enough to heal such traumas?