" ..... That as the world grows smaller, our common humanity shall reveal itself;" -Yes, these maps just to show how the Israeli state have pushed the Palestinians out to sea, and slowly eaten away the land of the people who lived here, before them! - The lot where the Tel Aviv University is now situated, was Palestinian in 1967!!!
Okay I'll admit it, I sort of got sidetracked there for a day or two... But Obama has settled in at the Oval and has already talked to more Middle-East leaders in his first day than his predessesor in his first 4 years! - George Mitchell has just been appointed special envoy to the Middle East - Richard Holbrooke to Afghanistan/Pakistan- Good men (More or less) and experienced! "The House of  Pain & Shame" will be wrapped up before the end of the year and the saleries of his staff is frozen stiff... Apparently a good boring, solid change has come and Jon Stewart will have to work for a living, now that it'll be much more difficult to spin a yarn.... I mean Bush and his croonies, made satire sooooo easy!
But, while I've had my eyes averted for 48hrs;
The Israeli Defence Forces (Only a true hypocrite could dream up that name!) has left Gaza, but have tighten an ironclad ring around this poor strip of land. And in their typical style; They now continue to do, what even I will start to call Ethnic Cleansing! - The very few reporters, who's been let inside of Gaza, reports of whole neighbourhoods destroyed down to the very last stone.. In the few buildings standing, graffiti drawings of toombstones with" R.I.P The Arabs  1946 -2009" written next to it, says it all.. 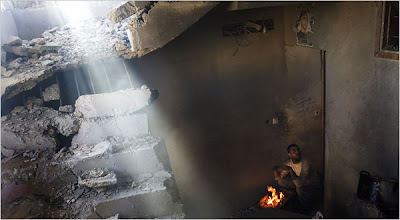 Horrific stories of Israeli war crimes and crimes against humanity no longer surprises us.. The "Charm school offensive" - Israeli envoys have been send out to "explain" -  all over Europe-does not come as a chock neither.... But the fact that the Israeli will only let medicine and food into a bleeding and dying Gaza with scores of deeply traumatised children/people is... !!!! Both National and International foreign Aid workers and medical staff are now worked down to the bone, exhausted and in dire need of help and replacement!
The Israeli blockade has now lasted for 18 months and this means (among other things) that also all building material is banned/not allowed across the borders..!  The blockade is still on... !!!  2 thirds of Gaza is reduced to rubble and at least 50.000 people are homeless, - the schools where many have taken refuge will open on saturday and then what? Where will all these people, old and young go? They have nothing at all....! People are going through the rubble, crying, trying to find personal belongings, a family photo, a birth certificate, a dress, the baby's favorite toy - all the little and big things, which defines us and proves to us, who we are! To rescue every bitty thing, which can be salvaged and reused... Bodies are still barried under concrete and dust starting to smell, the sewers are destroyed, clean water or electricity is nowhere to be found ....... The aftermath of war made so much more tragically heartbreaking by the inhumane treatment of the Israeli Gov.! The Zionists can no longer be disguised as " Self defence and Only attacking members of Hamas "
In the DR Congo , The Rwandian army has crossed the border to go after the insurgents and have arrested their former ally Laurent Nkunda, and here like anywhere else... Well, it's the civilians who pay by endless suffering... Civilwar is still raging and this incredible rich country is on its knees..
In Burma/Myanmar the Generals have not eased their suffocating grip on their own people, human rights are deteriorating by the day and it has been quite a while since we heard from Aung San Suu Kyi ...  The fate of the Karen tribe and other tribes of Burma is uncertain as they are driven from their homes, land and persecuted.
In Tibet.. Life is just as unbearable as it was 6 months ago.... But we'll let China get away with murder! And missed the opportunity for real pressure with the Olympics...
In China two unlucky guys will pay - with their lives, for the crime of hundreds in the Milk/melanin affair... Another show trial is being televised for our " Western pleasure"

"......  - know that your people will judge you on what you can build, not what you destroy. To those who cling to power through corruption and deceit and the silencing of dissent, know that you are on the wrong side of history; but that we will extend a hand if you are willing to unclench your fist......."