The death of Samuel P. Huntington 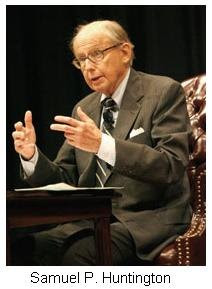 Strange.. There's have been no notice, in Denmark that is, of the death of Samuel P. Huntington, professor and author of the now famous paper; "The clash of civilizations" which is quite, one could say; timely?, these days. Not that I concur with everything he says, I do think he is wrong on several important key issues, but he did have a point; How mankind's turning to religion and the violence it ensues.
He wrote about the US in Iraq and Afghanistan; as an outside force going in and tearing down old structures - with town elders etc. Arrogantly assuming that our way is so much better -They being backwards and anachronistic. and then act all surprised when our ways are not welcomed with open arms and chaos follow...He made this thesis as a consultant to Pres. Lyndon Johnson about Vietnam back in '60'es
He was a brilliant and broad- minded man and wrote on several very different subjects, but the "Clash" being his most famous - being a temperamental conservative Democrat, he was not a man who had the exact same views as me. But I do not understand the utter silence in this country, with which his death on Christmas eve, has been received.......
Links to NYT Orbituaries
Posted by Gabs at 5:31 PM

It is indeed a loss to our collective humanity. Yes. the silence is deafening...