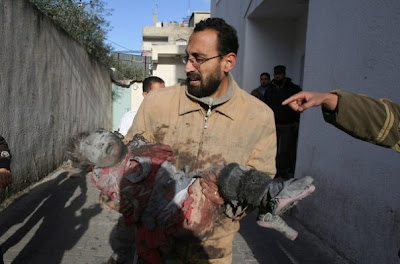 This photo is the one of a dozen, send to me in a mail from Gaza via London - I cannot find the ones from Tarneem S. Alagha (Facebook) And I didn't get to save them, before they were deleted!!!
Mark Zuckerberg, the very young (and highly controversial) CEO of the immensely popular social platform;"Facebook", (A forum I myself enjoy, very much) has removed a series of 59 photos, (which I referred to in the my post Jan.) Not only form my page, but every "profile" they were posted on top of this, they have banned the young Palestinian student, living and studying at the American University in Saudi Arabia.  She'd posted a "family album" where all the horrors of war were clear to us all, and with the names of the victims; I.e family members "tagged" one each and every one of them they did make a certain impact on viewer.... They came with a warning!
For a while a link to the original photos, were open on the website of the Danish Newspaper; Politiken... But it's now been closed too and a new set of photos, much less, horrific, much less revealing of the real damage, not only to humans, but also damage done to the city of Gaza. It's plain, that the alleged "Only military targets" announced by IDF (Israeli Defence Forces) spokespersons is a total falsehood. Here's a link to the censored version
Yesterday Israel bombed 3 UN schools in Gaza city. These are the schools, the very same schools, the Israeli forces advised the population to take shelter  in the leaflets distributed just before the invasion - (They're still being dropped in their thousands - Still telling the population of Gaza to leave their houses, but no clues are now given as where to run!) The IDF maintains, there were militant Hamas soldiers hiding with the multitude of Civilians - (All the old people, women and children - you see!)  - shooting at them;. The UN strongly denies this allegation, as they screen everyone coming in and have a zero tolerance for militants/weapons.. (Danish Link - English Link)
Obama got of his bony behind - finally! And he actually mumbled something about saying; Something ...... after January 20. Let's hope the Gaza population can last that long.... UN calls for an investigation, - and; At last - at last, Israel begins to hear the same level of International pressure and critique as in 2006 - when IDF invaded South Lebanon.
In 2006 Israel failed miserably in the war in South Lebanon. Having a defined and restricted mission, namely "Destroy "Hezbollah"" - This time around, the name of the game is much more fuzzy. They (IDF) have stated that, they will attack the Hamas rocket launch sites.. wherever they may be and thereby squelch the terrorist attacks on Israel. But this doesn't make sense really, since this would mean bombing/attacking loads of empty lots, grassy meadows and fields. Not very exact, to say the least, and this gives IDF a Carte Blanche to go bomb, shoot and destroy who and where ever they see fit. This is in total agreement and accordance with George W. Bush by the way!
At the same time they now have a fantastic opportunity, to test new weapons/rockets/("Dime")-bombs designed for "Urban warfare" Maximum bodily harm, minimum structural damage.
Israeli soldiers have long been specially trained for this type of war; urban warfare and maybe on this ride, they will come home, not in the body bags promised by Hamas, but as the proud Israeli Defence (!!??) Forces, having "won" in a war fought against mainly women and children...! (Remember that Israel have mandatory army service; 2 years for women, 3 years for men. And that these youngsters (18- 25) will have this "experience" imprinted in their souls for life.. Violence begets violence - Hate begets hate... Peace in the Middle East is a looooong waaaaay off!)
"History is recorded by the victorious" they say and maybe Mark Zuckerberg have been able to delay the effect of truth, but this is 2009; Every man and his dog has a cellphone with camera, now! - The internet/www is immense, there's social platforms dozen and the "losers" now have a voice.. - Showing in pictures and words;
what hell looks like from the inside.
And censorship cannot erase that...
War is not as it used to be and neither is History...!
PS. If you understand Danish, I highly recommend listening to "Orientering" on DR1 - very well researched and great in-depth reports on the Israel- Gaza war and loads of other international news!
PPS; Read this Blog for the "Double standards" on part of the US and Saudi Arabia!
Posted by Gabs at 7:47 PM

Hello, This me Tarneem Alagha,

I'm happy that you care and you wrote this article , I still have the photos if you want me to send them to you, people they might forget about the last Israeli attacks on Gaza and its nation, but some people like us should have the responsibility of reminding people over and over about what's happening their everyday.

by the way, I'm tarneem S. Alagha, a palestinian student, born in GAZA, live in UAE/ Ras Al Khaimah, but i live and study in the AMERICAN UNIVERSITY OF SHARJAH .. not in SAUDI