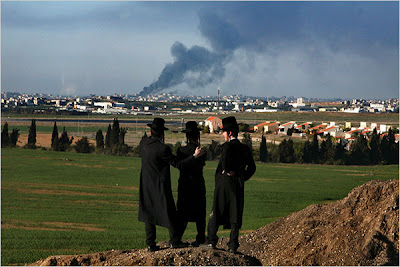 Last night on the Danish news; I realized that NYT had published a photo of three dead Palestinian babies. And apparently this is one of the first photos depicting the horrors happening in Gaza? The atrocities are happening right now - at this very minute - even if you read this between 12:00 -15:00 - the daily three hours supposed lull in the current and for Israel, so very counterproductive war on Gaza!
Well; This particular photo had provoked a lot response (and now I can't find it!)
-I wonder if the land of the brave and the free, really are kept in the dark about most things, happening out here in the real world... And maybe, this is the reason for much of their so-called (By us Europeans - Just tag Dumb Americans-YouTube about this subject) ignorance and the fact that only 7% of Americans posses a passport? That the their precious Democratic system, they would like to see implemented all over the world, specially in "backwards" places like Afghanistan and Iraq is maybe flawed? That the amount of money you have or are able to amass is equal to the power you can excess over the media and the information being spread to the people? That the various, powerful lobbyist groups can push the truth, not only in foreign matters, but also in environmental issues in your own country. And are therefore able to keep not only you, the people but also the legislators in total ignorance as to what the truth really looks like? Ah, well - I suppose this is not news to anyone but me, and even I had been suspecting it for years!
But after seeing this Video/documentary about the origins of the Palestinian fate and the Israeli occupation from 1947 til present ; Made by Israeli Human rights and American Jews for Peace, interviewing Noam Chomsky and UN's Richard Falk amongst many others.... - I can
now clearly see how, the Americans can live happily ever after, without knowing anything at all about the world! -Same goes for the Australians ?
This poses yet another question; How can the US Gov. send young men and women out to war and expect them to willingly give their lives for something, of which they have never been educated or informed about? It's like sending a large group of blind and deaf people to cross the New Jersey turnpike at peak hours - some of them are bound to get hit.

I have now received several written threats and demands for proof of my "accusations" against Israel. +  a few negative comments on the posts about the Israeli occupation of Gaza and the West Bank - Some of these "comments" are hilarious, some are a bit weird and some are scary!
The only common denominator is the Anonymity of the sender, which shows me that aggressors like to stay cowardly unnamed and in the shadows...
I'll will not publish any anonymous comments; positive or negative!
Oh and by the way; my answer is;
See the video embedded above!!
(psst... It's an hour long, proper documentary
and maybe more comfy to watch on Google video?)
PS As an answer to the one commenter, who protests to my consistently coloring the letters red; But this is on purpose, you see! - Different shades of red = Blood
- and then only on posts about the Gaza invasion.
Gee... You must have a lot of time on your hands! Go read someone elses Blog, why don't you!- The Internet is crammed with bloggers with views to fit any kind of outlook! - And it's not like I have magical powers and tie you up in front of your screen and make you read mine! (Would be nice though, I am one of those, who'll check my site traffic daily, just to get the ego kick of the day! c",)
Posted by Gabs at 11:45 AM