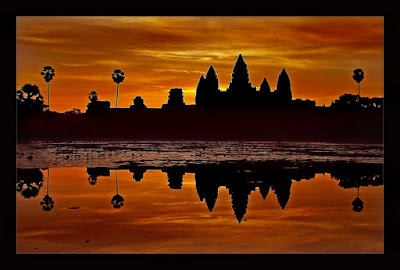 Mr. Nol, my very nice TukTuk driver, were waiting this morning at 05 am... Off we went to see the mythical sunset at Angkor Wat - One of the seven wonders of the world, but only just discovered 100 years ago! The magnificent and enormous temple site sits in the middle of jungle/wood, it's an incredible architectural homage to the first the Hindu Gods and later on to Buddha... The buildings date from the 4-500 century and onwards to the ninth.. Build by different Khmer kings, or rather their the hard labouring . And yes, it's true all that you read or heard about the place, it's truly amazing, breathtaking and so big, that it'll take you days to get around to all 4 corners of the excavated site....

If you can imagine this place, where every little piece of stone has been carved with divine pictures, with dancers, priests and artists and the more mundane as a woman giving birth, weavers, workers and entire murals depicting the glory's of wars fought and won!( Siam Reap means" Siam defeated"-Thailand being the Siamese kingdom...) Ahr... the breathtaking beauty of all this is hard to describe in my limited English ( Or any other language...!)... Besides the usual; ah's, oh's, wow's and the Oh my,my's!

Me being who I am, and pretending that I know everything.. or at the very least; making it up/figure it out as I go along... Did not study any guidebook, did not ask anyone, but simply started up through the main entrance... Said hello to a Khmer boy who apparently lives inside this enormous building, half ruin, with his grandmother,who takes care of a huge Buddha statue... hidden within the endless corridors.... and then I went out on the other side and up a road....And through the woods......... Actually,when I eventually figured out that I was probably lost, I just kept walking.... As there's so many temples on the way, hidden behind small lakes and big trees, it was actually fine with me, being lost! Had some conversations with a couple of kids walking to school( It was now about seven am) and was even offered a ride on the back of a bike, but as the girl offering only reached my mid thigh- I took her...! Great fuss, we stirred when we arrived at her classroom...

Finally I came back into the official trail of the main temples but against the flow of Tuktuks, buses, motos and elephants! I at last, found a place to have breakfast and get "ripped of" by the gang of kids there...Told them to go to school, instead of selling stuff in a very insistent manner to dumb, lost tourists like my self... But when a small girl out in the middle of nowhere ( Well,next to a Temple of cause) asked me the usual question of "Where you from" answered; "Oh, Copenhagen" to my; "Denmark" (Which normally only causes a blank look) - I just had to buy; her 2$ silk scarf - yet another one!

After 5-6 hrs I was back to Angkor Wat from the "wrong side" and was "rescued" by my very worried Mr.Nol... When I told him the whys and hows.. He naturally ( I would have done it my self, if I knew how!) made me the laughing stock of all the Tuktuks waiting for their clients..to take them around to the next Temple.... and the next one, and so on...!

Out here in these incredible and divine surroundings: I don't know who looks the more idiotic: The loud Chinese males with cowboy hats, the very serious Japanese girls in full " Explorer" mode ( Being driven in 4WD Lexus with air con!!), the Korean girls in disco outfits incl. high heels, the pale European girls with bad postures or me, doing a 16 km "walk in the woods" barefoot with only flip-flops ??????? (Was bitten by big, bad black ant MF twice! I cried like a baby)

"Memsahib wants to go home" she cried to her driver, which he did... giggling all the way! Tomorrow I'll be back for more, but in the correct way, ha'kuun!

Ps. After some hours of good siesta, I went to town, had my self a good old 5 US$- 1 hour foot massage (Ninon, you'd love this place!!!) - Some dinner by the river and will now be going back to my room and watch some Spanish TVE, at least it's "soaps" where I understand what they're saying, as opposed to the endless Chinese, Korean, Indian, Russian, German, Khmer, Thai ditto....!

By the way to ensure us all a good night sleep, could someone please silence the big Bullfrog outside my window? He is quite unattractively and very loudly serenading/or lamenting the absence of a fellow Bullfrog all night?! - it sounds like a mix of a cow and a donkey...!!