Random thoughts and some explanations... 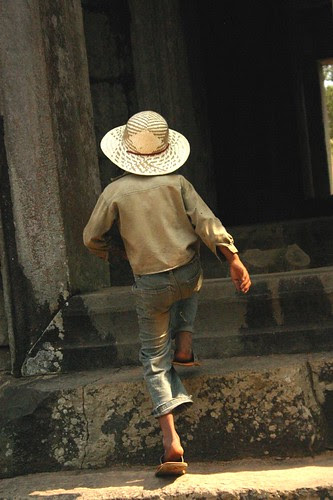 Well... Had a nice morning , again, Mr.Nol and I... No sunset due to heavy rain and cloudy weather... But never mind, I've had so many other very interesting conversations, every time we stop for coffebreak or yet another Temple... I'm about had enough of Temples, I think... The Khmer might think me lazy or shallow... But I tried to explain that for me it's not only the fine, very fine temples but everything around them... that seems to fill me, my eyes and mind up in matter of hours... Talked to some of the selling women today and we all agreed that the Chinese don't make for very good tourists/costumers... They come in hordes, spilling out of countless buses, zip up and down the Temples, shriek, talk very loudly and buy nothing....
When I had my fill of impressions, which takes me about 5-6 hours... I'm good and ready to go back for a siesta at my hotel... So about 10-11 ish we head ''home"...
Today was different, being Sunday, Nol invited me home to meet his family... I was delighted of cause, only sorry that I came empty handed! ... He lives with two of his sons and a 'new' wife (They were married in 2005) in this really nice, sparse big wooden house! It's very modern in the way it's not on the usual stilts.. But his oldest son lives in , what must be their old home, which is a really small half wooden half palm leaves shack on stilts... it sits in the backyard... What a rare treat...... They invited me to some fresh coconut juice and we sat and talked for awhile and then went back to my hotel in between downpours... We'll be back on the road again tomorrow at 5:00 am.... Even though it's my birthday!

Random observations:
The motos here is normally carrying 3 adults... But this number can easily increase to 4 + several kids. Motos are used as transportation of ANYTHING! 50kg's sacks, a basket full of piglets, 5-10 mtr long bamboo/iron/metal/wood sticks... you dream it up and it's probable been done!

Why has caring Canadian, American or English families who has donated a house or a palm leaved shack, put up signs, sometimes much bigger and in much better shape than the "house"it self? - The sign stating f.ex that this run-down, poor excuse for living quarters, for a whole family was donated by Mr and Mrs Thomas Jones. Canada!
Why not just give the 50 - 100 $ such a place costs and be done with it?

In the whole of Cambodia, I've only seen a handful of people wear glasses! Either they are so expensive that it's impossible to buy or else this is a nation of 20/20 perfect eyesight!

In populated areas it's hard to find birds or crickets... The sound of crickets only heard on the grounds of big Hotels/Resorts and birdsong only deep in the woods... Which is a bit weird, the unnerving sound of crickets being THE sound of heat and warm weather....! But alas they are being fried and served up with chili.. Birds likewise... The same in Vietnam!

"The Kmer Rouge" evacuated all towns and cities, killed most of the intellectuals and skilled workforce. The "Kmer Rouge" 'only' ruled this country for 3 1/2 years, but continued to be active up to 1998... That's only 10 yrs ago!!! It's a monumental effort to have rebuild this nation ravaged by corrupt leadership for centuries, civil war, genocide ( about 3 million during Pol Pot, Big brother no.1 in the Khmer Rouge) famines and the thousands & thousands of landmines, which still claims about 500 lives a year!
Tourists with the right wallet size, wouldn't know the difference between Cambodia, Thailand or Club Med in the Caribbean..... Extraordinary people, the Cambodians: They still have a smile and a hello for you and everyone else passing them by!....

Well... Tomorrow it's my 50th birthday and I've already had some congrats! Ninon is on the way to Portugal from Spain and therfore out of reach... But I don't feel alone and the rain has stopped!
Posted by Gabs at 2:01 PM

I enjoy your posts very much and have more than one quiet giggle a day. That's supposed to be very healthy at our age!