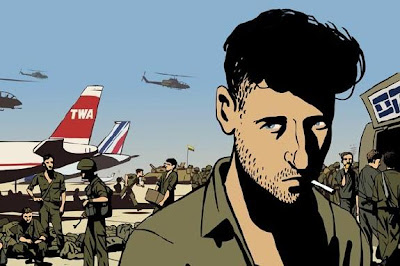 Well, I wrote about "Waltz with Bashir" - The animated movie about the bombing of the Chatila and Sabra Refugee Camps in Lebanon.. The posting was before the Golden Globe award to Ari Folman, director... And congrats!! - Even if it was a bit disappointing, that he didn't say a word about the war in Gaza, which was full on, at the time of the event. But maybe he'll mention it, in an aside, if Ari Folman wins again tonight at the Oscars?

I hadn't seen the film, at the time I wrote the post, but now I have. And I must agree with Gideon Levy in "Haaretz"  in his very harsh critique of the movie. Yes, it does have a propaganda-ish nature, yes it is a beautifully animated and very talented film... Yes, Ari goes to war, sees some horrible things, drinks a bit, cries a lot, calls his therapist at midnight and sings love songs to Lebanon while crushing it under Israeli tanks! Let it roll, baby - what a great Isareli army! But it's not the IDF's hands, that held the guns, that killed the innocent lives in the Palestinian refugee camps on Lebanese territory - And in the end of the film, when the real footage comes up, with real people in real pain - That's where you see the real massacre... But according to this very talented and very astute Israeli filmmaker;
"Shame on the murderers, but it was not us, we didn't do it!"