"Do something! Do More!" 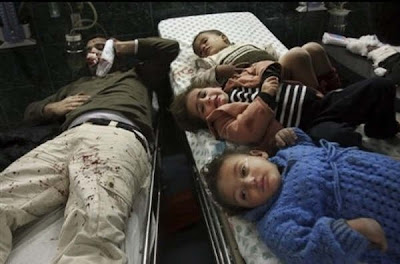 Please tell me; How can hurting and killing children be a viewed as a solution ? To anything at all?
How can Israel really lie so blatantly? And still insist that such a well organised military operation is plotted down on a map, all soldiers and those in the reserves called in, strategies agreed upon, weaponry hurdled together, the mere logistics of food and supplies in place and all this in three weeks and because Hamas didn't renew the truce deal Dec.17.? This gigantic army wiping out the Palestinian population in Gaza, for the most part only armed with old weapons, stones if at all. Civilians being attacked by the most sophisticated army in the world, is this the only solution/answer Israel can come up with? Remember! This invasion was preceded by months of Gaza being closed for all import of food, fuel medicine and aid. Israel is kicking at a people already at it's knees....
A major military operation that would have taken months to plan and set up for execution....
This is a link to 59 very disturbing pictures on Facebook, it's a private "family album" and all persons, dead, half-dead or barely living are tagged with their names... This is from the inside of Gaza, where no foreign reporters are allowed in by Israel
Tonight on the Danish TV2; (Really not my favorite news programme!!)  An interview with a Norwegian Doctor, with such unbelievable sorrow and horror in his eyes, telling about how they operate in the hallways, wading in blood, people dyeing before they can be attended to, most of the wounds are in the head, abdomen and amputations of limbs; 40% of the victims are children.... This poor man, looked like he couldn't do this much longer, at his breaking point... No wonder, this is getting unbearable and well beyond my threshold of pain, and I am sitting here in Scandinavia;-  safe, warm, with electricity, water and food... - on my couch after having my loved ones for dinner!
And two days ago this text message ticked in on my cellphone from yet another Norwegian doctor; Mads Gilbert; (Translated from Norwegian)
"Thank you, for all your support. They have bombed the local market in Gaza city two hours ago. 80 wounded and 20 dead. They all arrived here in Shifa. Hades!!(Hell) We are wading through death, blood and amputated limbs. Loads of children, a pregnant woman. I've never experienced anything as horrible. Now we hear tanks. Pass it on. DO SOMETHING! DO MORE! We're now all living in the history-books..."
Mads. G.
0301 2009 - Gaza, Palestine
Posted by Gabs at 1:01 AM

Facebook seems to have deleted the page/photos? How can we find out what has happened to them?