"These tears are shaken from the wrath-bearing tree.." 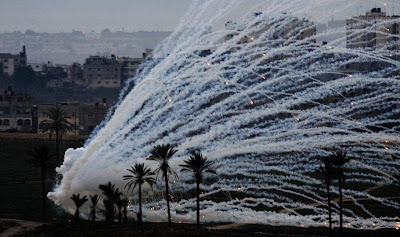 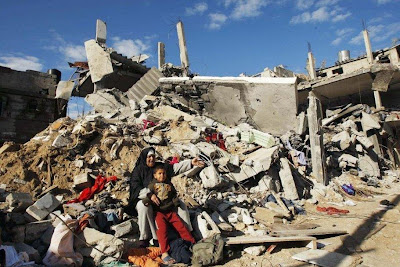 It's time for Israel to let in the international reporters and journalists, instead of keeping them within a 5 km (some places more) buffer zone.. If Israel have nothing to hide, let them in as to have a more balanced views of whats going on inside the war...
The brave Palestinian journalists have to live there with their families, and therefore are understandably fearful of Hamas and the repercussions of statements made against the ruling party.
The UN and the Int. Red Cross have reported horrific tales of 110 people hurdled together in a building and then shelled, wounded children left to die of dehydration and hunger.
IDF bombing hospitals and Aid workers etc etc... This harrowing list just grows longer and longer....
"The Lancet"; A stout medical weekly, have a report from the West bank (Where no Hamas rockets are fired!!) where 5 unbiased doctors went and had a real surprise, when they witnessed the daily harassment the Palestinian population has to endure; I.e. 33 weeks old triplets waiting for 5 hours in the heat, at the border crossing, when having to go to the hospital outside the West bank and finally let in, without either parent!
In the same edition of "The Lancet" there's a diary from a Aid worker in Gaza....here
(I just found the other 13 entries from his ongoing diary here on BBC)
(This is another diary from the BBC correspondent in the area; Jeremy Bowen)
This war is just the culmination of the long Israeli blockade, where no water, electricity or gas has been severely rationed for the last 6 months. This war with all the modern armoury is kicking a civilian population who's already laying down.
My wondering about the timing is apparently not that far off; The offensive had to be before the inauguration of Barrack Obama Jan. 20 and before the Israeli election Feb.10.
The war will hopefully ( and properly) be over before Obama and his foreign secretary; Hillary Clinton is sworn in... And the little Obama has said, makes promises for a change in old policies and calls for a more active role in Middle East - than just supplying arms and "All Access Pass" to Goliath.
And now even the more conservative voices in the US, calls for a tough treatment of Israel. Even a Carte Blanche (Given by most of the former US Adms. and redesigned - taken to a whole new level by G.W. Bush) can be maxed out!....  (" In the last 25 years, there have been no serious discussion with the Israelis about the damage, that settlement activity - incl. land confiscation, bypass roads and housing demolitions - does to the peace-making process..." Aaron David Miller; Newsweek)
PS. If you don't suffer from a heart condition, and you still haven't had enough of horrific pictures from inside Gaza - Here's a video shot, just after a bomb has fallen on Dec. 27. I could only stand for 3-4 minutes before my tears blinded me... (See the title of this post... from the T.S.Eliot; "Gerontion")
Posted by Gabs at 1:17 AM