"With such Knowledge.... What Forgiveness?" 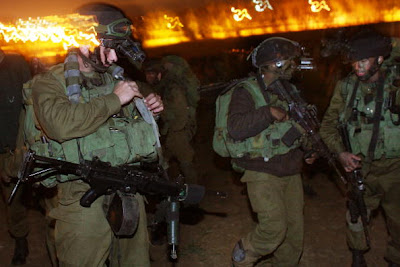 This is the night of the Sabbath, the night of the January 3. 2009... The evening when Israel in its infinite wisdom decided to invade Gaza... This slender piece of land aka the worlds largest prison for the Men, women and children trying to forge a life there.. against all odds and against the will of militant and fundamentalist Jews on the other side of "The wall of Shame" build by the Israeli jailers... !
Right now, there's no electricity, no water and no medicine! The hospitals within the Gaza borders have only fuel enough for their generators to last them til Tuesday and with the invasion which will claim hundreds of lives and wound many thousands more; The doctors can only wring their hands in agony and watch unable to help even the most banal, as human suffering take all kinds of shape and form...
This is Goliath throwing everything he's got, and he's got a lot..!!; (Thanks to US Arms donations) Pounding down at civilians with nowhere to run and now with the Israeli forces at their doorsteps, Nowhere to hide..... The Israeli Forces (IDF) allegedly targeting Hamas rocket launching sites; But that would be empty fields and grassy spots, not Mosques, schools and hospitals that have in reality been hit and destroyed, killing numerous Innocent people in the process... And when the smoke clears, what will be left behind? 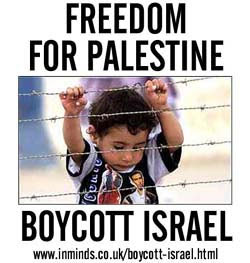 It's the timing, that makes me wonder;
With only a few weeks to go, (10.Feb'09) before the Israeli government is up for election; PM; Livni, Chief of Defence; Mubarek and the IDF "suddenly" decides to invade, with the intend to clear Gaza, for all things Hamas? It's also only some 17 days before their protector and ally; George W. Bush aka "Ole Faithful" leaves office! And a new president's sworn in, Obama, who has a whole different approach to dialogue with the so called "The rogue states" and hopefully; He has lesser of a tunnel vision, when it comes to Israel and her aggressive policies?
Does Israel see this as the 11.th hour? For "safely" invading? Without being told off by The White House; their most powerful ally?
The presidency of G.W. Bush is going down in history as an utter failure and as the most inefficient leader of the free world, the planet has yet witnessed!
But this change of guards will be much too late for the countless loss of human lives and the great tragedies for the survivors of the wars he has created in Iraq and now in Gaza, as a vassal to Israel! Every step of the way with the aide of his warmongering advisers in the oval office.

How can Israel and her inhabitants still believe, that their martyr status will exonerate them for all eternity, no matter what their deeds?
It's time for a truce, but a real peace...!! Not one, that makes one part a total winner and the other; half a looser.. No!
A lasting peace can only come if;
Israelis will start to see the Palestinian people as a nation with rights, and also historic rights like their own...! Not a second class tribe, one hardly endures and one try and make their lives as difficult as humanly possible, not demolish their houses and rob their lands! Every child has a right to education, so stop closing their schools!
Give back, everything you took and then, and only then! Will you be able to sit down and start to negotiate a real and lasting peace between equals!
-0-
"Israel is committing a shocking series of atrocities by using modern weaponry against a defenceless population - attacking a population that has been enduring a severe blockade for many months." (The U.N. Human Rights Council).
Posted by Gabs at 11:44 PM

Although from different places, but this perception is consistent, which is relatively rare point!