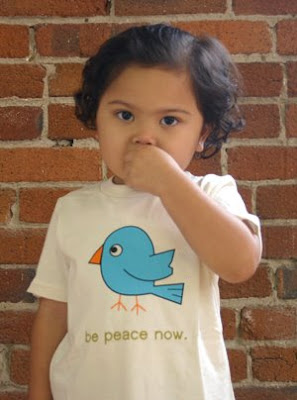 All right,  So we've had a month of; War in all it's gruesome reality! We've seen historic changes about to happen... And now, after having raided the freezer for all the Ben & Jerry Ice cream, I could possibly eat, before turning greenish - I find it's time, to revive my old 'hit' ! (And also a sign of utterly lazy bones mood) And reintroduce the monthly (or that rather depends!) ; 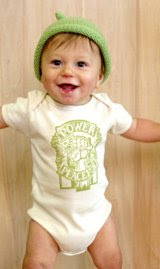 Tragically hip & Cool Posts;
And today I bring you these Tees and such; For the smaller ones amongst us! Let them be our hope for a much better world!....... In keeping with the Palestine and Anti war posts, I didn't stray to far and I found them here at The Michael Franti and Spearheads site! He's a long time earning his wings, with different causes as Oxfam, Amnesty International etc. (By the way; They make great, great music! & Heaps of gracias goes to Ninon the nopostslately Mermaid for telling me)
I found "Birdie" here
"Power Peace" here 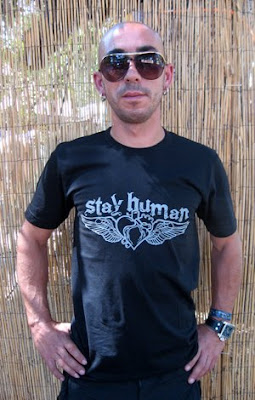 This "Stay Human" tee, I posted as a cadeau/Saludo para Vittorio! Riding his ambulance all over Gaza, come rain, White Phosphur or what ever, his enemies can dream up, to throw at him!
Buy the Tee here
Posted by Gabs at 12:22 AM

Having entertained my grandkids for the weekend, the toddler T's really touched me.

I thaught, you'd might like them... i still like the "power to the peaceful" hoodie the most, but that's from a strictly selfish point of view... They baby/toddler clothes is sweet!!!
Speaking of Michael Franti and the spearheads, did you hear the OBAMA SONG?? you can get it as a free download on their website, it's pretty funny to hear him, for once he seems so happy!!!

Speaking of the kids being the future and all, did you hear about the 12 year old kid who wrote a letter to "Politiken" (a Danish newspaper), with the title, "I don't want to inherit your war!" (Jeg vil ikk arve jeres krig! af Hannibal ... læserbrev Politiken, denne weekend)
He's meaning the war in Gaza, I haven't read it, just heard a short interview with him on the danish radio! I was very impressed, he knew more than most about that war, and he actually did what he could do at the age of 12, to make a change! Again that's more than what most people do... you should try and find it! I'm sure you would be impressed too!!!